Wild Weather in Israel - Kansas comes to the Galilee 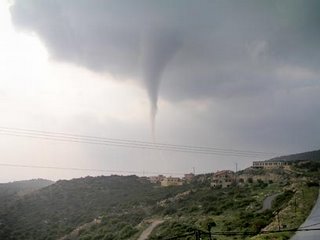 The tornado touched down during a hailstorm in the Acco region, striking the Arab villages of Julis, Fassouta and Jedaideh. Hail as big as ping-pong balls was reported as far away as Nahariya. In southern Israel, sandstorms reduced visibility to less than three feet.

(and here's a video of the tornado as well)
Tornados are very rare in Israel. When I was little and saw the "Wizard of Oz" on TV, I was totally freaked out by the tornado scene and Dorothy's house spinning in the air.

Oh well. I guess my credibility with them has been shot.

I'd better bring back some decent gifts from the US...

you sure that's not Mrs. @the Muqata getting more and more worked up that you're still not home to help clean?

Thanks StepIma - trying to get me into even more trouble?!

At least it only touched down in arab parts b"h

wow. when the news sites said tornado, I just asusmed they were exaggerating calling a storm a "tornado". Now that I see the picture you posted, I am amazed..

nice one, trying to pin that tornado on the weather.
we all know that "tornado" is the handiwork of hundreds of jewish women doing a whirlwind of a pre-pesach cleaning job.
in fact, that's what i looked like today.

my friend told me about that and just laughed, thought he was joking! guess not... lol @ 'whirlwind of a pre-pesach cleaning job'!

I didn't see any hail as big as golf balls, but there was certainly ice cube size hail pieces all over Nahariya.

I missed the twister but traffic was absolute hell. None of the traffic lights were working and none of the drivers were following traffic rules.

Jameel: Growing up in the midwest, we use to have tornado warnings all the time. most of the time, we just stayed indoors and continued with whatever we were doing.

I recall once though that we had to go into the basement and one of my brothers who must have been 17 or 18 at the time refused to join us. He said that he'd stay upstairs and if he sees a funnel cloud coming towards our house, he'll run.

I heard that it destroyed a lot of crops in the Galil. I hope that the farmers won't be hurting too much (and that the price of produce doesn't skyrocket).

jcop - generally up north, people more or less follow traffic rules. For example, when the light is red all the cars from all directions don't drive and honk.

I also remember the tornado warnings growing up, but from the time I moved back home for college until I made aliyah (about 10 years), I don't recall even one warning in our area.

scraps, we haven't done our big planting yet. (supposed to be this friday or next friday), but the almonds are still looking and tasting real good, and I don't think our cherry tomato plants were destroyed.

Eshet Chayil- are you for real?!

- sorry, you don't have to answer, I don't want to pick a fight on Jameel's blog. I just can't believe you said that.

Purple parrot, nope. I was being sarcastic. Sorry, not looking for fights. I'll probably just agree with whatever you say.

Where I live, we get tornados every once in a while, but it always seemed that they weren't very dangerous or threatening. When there was a warning a few years ago, a co-worker, who was new in the area and was from NY and therefore not use to them, totally started to freak out. We reassured her, it was nothing, noone ever gets hurt. HOW WRONG we were. It not only destroyed a few communities, it did kill a few people. Ever since then, whenever there is a warning in the area, we definitely take it seriously.


Cool pic btw! If I was a little more a risk taker, I would love to participate in a storm chase.

Shabbat Shalom everyone -- I'll be back blogging on Sunday (after I clean the car...and other fun pesach cleaning tasks!)

All these freaky natural disasters... lets really think about them!

As long as no one got hurt, that is one spectacular picture.

TAFKAPP and Eishet Chayil; I'm glad you worked this issue out! Thanks :) Nothing beats Shalom Blogayit!