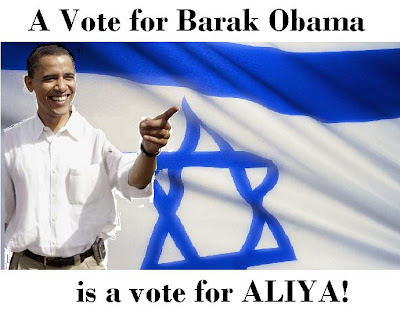 Is that a real bumper sticker? If so, where can I get it?

Ron: Its not hard print up bumper stickers...drop me an email -- maybe I should print them up?

i don't think ahmadinejad being left unchecked is going to encourage anyone to make aliyah.

what stupidity.
im not fan of obamas but this is just plain stupid and the inherent irony is lost on all those who think its "so cool".

When he taxes away a large part of our income, that's going to be less money for tzedaka in Israel, like Amit Schools. And less money to send children to Jewish Day Schools or Jewish camps, where they can learn Zionism and Torah.

Sigh. Too many people here buy into his Hope and Change message.

Obama is a 'smoothie.'-extremely dangerous.I am scared for Israel if he is elected.

The irony is that if Obama wins it is going to be even more dangerous to live in Israel!!!!

Its a bumper sticker for crying out loud.

I dont even know who Im supporting in the upcoming election! (Its hard enough surviving Olmert and Livni)

I like it! Not that I think either of the candidates are much good.

The Obamessiah is definitely the second coming...of Jimmy Carter.

The reason not to vote for Obama is is foreign policy, not (primarily) his domestic policy. He is much more capable of hurting Israel than of hurting the US. So I think these bumper stickers are a little misguided.

To everyone here pointing out that Obama is likely to make living in Israel less desirable: Perhaps you have a point. Nu, so maybe we should make another bumper sticker that says, "Yeridah ...because he could win..."

Faigey: Why are you taking it so seriously?!

If I didn't leave during eight years of the baffled Mr. Bush, I don't think this guy is going to drive me out. But then again, I think McCain is going to to take it.

Jameel: The reason to take this kind of joke seriously is the extreme prevalence of moronic anti-Obama sentiment in the frum community in america. Jewish people here act dumbfounded if you so much as consider voting for him. "obama? He is a muslim!", "Obama? can't wait to help admidinijad get a nuke". People who seriously think that Obama is a 'secret' muslim shouldn't be allowed to vote and should be institutionalized!