The Rabbi who didn't give up Beit She'an

The borders of Israel are today under dispute, but that was also true 700 years ago.

When Estori Ha-Parchi (Ishtori Haparchi), a Spanish-French scholar, came to Israel around 1313, he was shocked to discover that some Jews did not consider places like Ramla and Beit She’an to be in Israel.

Ramla was called 'Gat' by the Jews since it was assumed to be the site of the Philistine city of Gath. The city was also called 'Falastin' in Arabic, because it was the capital of the 'Falastin' province, which was the name the Arab conquerors gave to the Byzantine province of 'Palaestina Prima'.

How could it be, Estori Ha-Parchi asked, that these towns aren't in Israel? When we walk from Tiberias to Shechem, both of which are in Israel, we pass through Beit She'an. Are we really expected to believe that when we get to Beit She'an we need to pass through a border crossing?!?


"It's only to horses and camels that you need to explain that Beit She'an is in the Land of Israel ... But what can I do? We now have recent arrivals, who are considered scholars, and who convince the women and ignoramuses not to live there, and say that it's not the Land of Israel at all, but rather abroad ... and so I had to explain it at length, to revive the hearts of the contrite ones.”

Estori Ha-Parchi writes that he would have kept silent if it would have just been a dispute on the details of Halachot in the different regions. But to say that whole towns and villages were outside Israel? He couldn't accept that.

Estori Ha-Parchi believed that the land was intrinsically holy, and that nothing that we or anybody else did could change that. He did not want Jews to forfeit parts of our land out of ignorance and apathy. And so he decided to set the record straight by writing a book about the land and its Halachas: 'Kaftor Va'Perach' (available on the excellent HebrewBooks site)

Becoming the first Jewish researcher of Israel, Estori Ha-Parchi spent seven years walking the land: two years in the Galilee, and five years for the rest of the land, both the West and East banks.

His book, which deals with the laws of the Land, goes into a lot of scientific research: geography, botany, history, astronomy and numismatics. At one point he compares astronomy to geography: just as everybody sees the stars and many don't know which are which, so it is with the towns of Israel. He, of course, preferred the latter, and he explains that having spent so many years walking the land, he can now identify places.

In identifying places mentioned in Jewish sources, he realized that the towns and villages retained their original Hebrew name in Arabic. At his time this was a new idea, and he spends some time in his book proving this point. Some of the towns identified in the 19th century were previously identified by Estori Ha-Parchi, such as Modiin, Usha, Eshtaol and Betar.

Estori Ha-Parchi didn't just talk the talk, he walked the walk by moving to Beit Shean. At the time Bet She'an was a small town. The town was a station on the Mamaluk ‘pony express’, which passed there twice a week, and a center of sugar cane production. The Jewish community was led by Rabbi Matityah, whom Estori Ha-Parchi admired and consulted with.

Estori Ha-Parchi quickly became Beit She'an's first PR spokesperson. It is a blessed land, he wrote in his book’s introduction: filled with springs and streams and much happiness. The land was very productive, the entrance to the Garden of Eden.

His efforts were successful to the point that his opponents acknowledged that Beit She'an was indeed part of Israel. As Estori Ha-Parchi writes: “After a long time those people came here (ie, Beit Shean) and admitted they were wrong.” 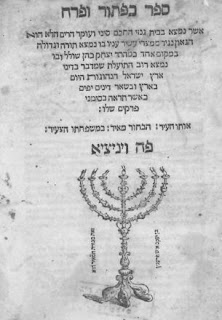 One of the amazing things about Estori Ha-Parchi, is that we almost didn't know about him. For more than 200 years after “Kaftor Va’Perach” was written, it was forgotten. In the 16th century, a manuscript of the book was discovered in Egypt. This manuscript, the only surviving one known today, was printed for the first time in 1549. The book again had to wait for history to rediscover it. It was reprinted only 300 years later, in 1852, in Berlin. By then scholars realized its significance and importance.

Had the book been lost, we would have never known about Estori Ha-Parchi and his research, nor about the Jewish communities of Beit She’an and other towns around Israel in the 14th century.

Magnificent! Thank you for your continuous and reliable posting.

Ora -- Your posts are consistently fascinating. I enjoy them tremendously. Thank you for writing them.