A Sane Israeli is a Leftist Mugged by Illegal African Migrants 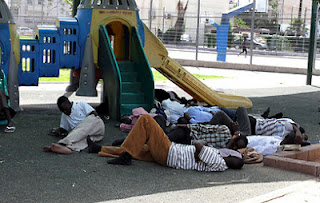 Israel has been under attack by the onslaught of illegal immigrants from Africa and over the past few months there has been an unbearable rise of crime -- brutal rapes and assaults of teenagers and women in Tel Aviv, Jerusalem, Netivot, Lod, Netanya, Eilat, Or Akiva, Bnei Brak, Kiryat Sefer, and more.

These illegal job-seeking immigrants are being deemed as "refugees" by all sorts of "aid groups" in Israel, who vocally protest all government actions to evict these illegals -- estimates ranging from 90,000 to 700,000. Many of the same "social justice" advocates who demand a better quality of life for Israel's lower and middle class, are also demanding equal rights for these thousands of illegals as well.

These "activists" live in fiscal fantasyland.

Israel's conservative fiscal policy is the last barrier preventing Israel from plunging into a recession that has befell most of the developed nations around the world since 2008. As the Eurozone stronger countries struggle to keep Greece, Spain, Portugal and Italy afloat with hundreds of billions of Euro in bailout loans, Israel has no such financial sugar daddy. No one will bail out Israel's fledgling economy if we over-spend. No one will come to our fiscal rescue if we go bankrupt providing services and social benefits to the tens of thousands of migrant workers who have illegally infiltrated Israel. We're on our own, and our first responsibility is to ourselves.

Despite the ongoing rabble from the "refugee aid groups" who routinely pine on the Israeli guilty conscience that "we too were refugees, and its our responsibility to accept these illegal Africans," MK Ophir Okunis correctly stated this morning on IDF Radio that 99% of these refugees are NOT legally considered refugees. Less than a few dozen have actually fled their countries due to political or military persecution and have directly entered Israel. They have all entered Israel via Egypt, via Libya, and via other countries. Once the refugee left their country where they were persecuted and entered another country where the threat of persecution ended, they are no longer refugees from their country of origin. As they continue their trek to Israel via other countries, they are no longer in search of protection, rather in search of opportunity and jobs. Entering Israel via Egypt they are here in the quest of economic opportunity and the benefits which Israel's left are more than happy to offer.

Unfortunately, Israel as a Jewish Democracy cannot tolerate this situation; not economically, not demographically, and certainly -- not the awful crime wave which has descended upon us.

Left leaning Israeli Journalist Guy Maroz slammed right-wing MKs in March 2010 for wanting to create "labor camps" for these illegal workers. He was among the most vocal activists demanding that Israel not deport the children of these illegal immigrants with their families.

Till it hit home for him.

Till he woke up and realized that the problem isn't only in South Tel-Aviv or Eilat (which obviously aren't his problem because he doesn't live there)...and the illegals started flooding all of Israel, his hometown as well.

In a heartfelt letter to Israel's Prime Minister via an opinion piece in NRG/Maariv, Maroz begs PM Netanyahu to take action against the surge of illegals:

"The writer of these lines, and his wife were among the most strident activists against the expulsion of the the children of [illegal African] foreign workers. That is why I permit myself to scream today, "No More. No more flooding of the streets and lives of Israel's poorest citizens [South Tel Aviv].

This week a friend hesitantly told me, and she is one of the most enlightened and liberal people I know, 'they have also come to us, to Hod Hasharon."

And they have arrived here as well."

This is self-preservation. This is the responsibility of survival of the Jewish State, for us, our children, and generations to come.

Hey Jameel - welcome back! Where have you been?

Joe, How many years are you living in Israel and you still don't get it? The Tycoons who run Israel's economy made sure they will have an endless supply of cheap labor for years to come and nothing you or I say or do is going to change that. Remember all those Chinese migrant workers? They're all gone. Truth is, at 200 NIS/day, they were too expensive. The going rate now for an unskilled foreign worker is just 80 NIS/day. Eli Yishai can talk tough and threaten to come down hard all he wants but in reality more Israelis will probably die in car accidents this week than the number of illegal immigrants deported.

Anon, it's definitely not about the tycoons at all who cannot really employ non-skilled and non-Hebrew people. The people exploiting the cheap labor are various low-level entrepreneurs who can hire the cheap labour for a cheap daily cash salary (avoiding the need to pay an Israeli or an Arab from the Yesha and other basic benefits).

The Chinese, the Thais and Romanians - as low skilled foreign labor are well-behaved and aren't committing crimes or trying to stay in Israel for the long term.

Its a different situation with migrants from Africa and Israel cannot be the world's last place of refuge for people from the Third World.

This is the Jewish homeland and if Israel doesn't exercise its sovereign rights to determine who is allowed in, it will disappear - its that simple and its began to dawn on even Israeli leftists tolerating illegal infiltration of the country is no long-term solution.

In a word, in respect to this matter Israel is not and will never be America.

NormanF,
using the 'Jewish homeland' card is 100% fact but lost on the bleeding hearts.

The logic is in Jameel's post. We can't be a destination point for everyone wanting to leave the third world. Just think about paying bituach leumi to 100 000 illegal immigrants (sending the money back to Africa).