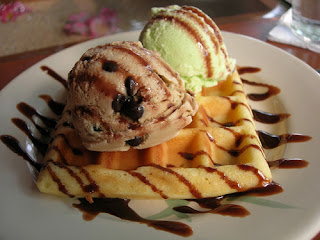 by Lurker, with Arnie Draiman

There is an interesting phrase used in Israel which is recited when one unexpectedly encounters a person for the second time within a short period:  pa'am shlisheet, glida ("third time, ice cream").  This is commonly understood to mean:  If we soon run into each other again (the third time), you will buy me an ice cream (since I was the one who said the phrase).

Some believe that the phrase is based on a similar German one.  But the German one doesn't mention specifically the third time, and refers to a drink instead of ice cream.  Some have suggested that it is based on a British saying “third time, I'll scream”, which Israelis would supposedly have heard during the British Mandate period about 75 years ago.  However, this too, has been debunked – since there is no British phrase like that!

So, we would like to postulate a new theory, one based on the first three times that the Israelites eat and drink after being freed from Egyptian slavery – all three of which are described in this weeks's Torah portion of Beshalah.

After the crossing of the Red Sea, the Israelites traveled to a place named Marah, their first campsite following their final escape from the Egyptians (Exodus 15:22-26).  Finding no drinkable water there (hence the name Marah, meaning "bitter"), the people began to complain.  Moses cried to God for help, and God responded by showing Moses a tree.  Moses cast the tree into the bitter water, miraculously turning it fresh and drinkable.  Thus were the Israelites provided with water to drink at their first campsite.

From there, the Israelites proceeded to the oasis of Elim, their second campsite (Ex. 15:27).  There, they found 12 fresh water springs and 70 palm trees.  Thus were the Israelites provided with not only water to drink (as previously), but also dates to eat.

Next, the Israelites trekked toward their third campsite, which was in the wilderness of Sin (Ex. 16:1-36).  Once again they complained, this time about the lack of meat and bread.  And again, God responded by miraculously providing for them:  That evening, a flock of quails covered the campsite, and in the morning, God sent down manna from the heavens – the first occurrence of a miracle that repeated itself every day apart from the Sabbath, for the next 40 years.

Verse 14 describes the manna as being dak ka'kfor ("as thin as frost").  Onkelos, who lived about 2000 years ago, translated the Torah into Aramaic, the common language of the day.  His translation for the word kfor ("frost")?  Glida – which in modern Hebrew, is the word for “ice cream.”

With the above in mind, the meaning of pa'am shlisheet, glida ("third time, ice cream") finally becomes clear:  The first time the Israelites ate or drank after leaving Egypt, they had water.  The second time, they had dates.  And the third time?  Glida – ice cream!

Arnie Draiman is a humor aficionado and a big fan of Ben & Jerry's but still doesn't understand why you have to wait for the third time.

Lurker lives somewhere, and posts on the Muqata when he's in the mood.

Welcome back, waffles! And Lurker too. Any good recipes lately?

Still trying to figure out Rashi there, not only does Oncelos translate the word as "Glida", but Rashi says that the word on "La'z" is Glida.

How can the word be the same in Aramaic and Old French?