Raise Your Hands if you Approve of Releasing Palestinian Terrorists!

If you think that a pre-condition for peace talk negotiations should be to release savage murderers from jail, then raise your hands!

If you think Israel should make a mockery of it's judicial system, and spit in the faces of the broken Israeli families whose children and parents were slaughtered by Palestinian terrorists, raise your hands!

If you think that Prime Minister Netanyahu should ignore popular sentiment and release terrorists just for the privilege of  sitting down at a table with a society that glorifies civilian murderers, then raise your hands!

If you think that Israel should bow to American pressure, endanger the lives of its citizens and soldiers, and free murderers while the US refuses to free Jonathan Pollard, raise your hands! 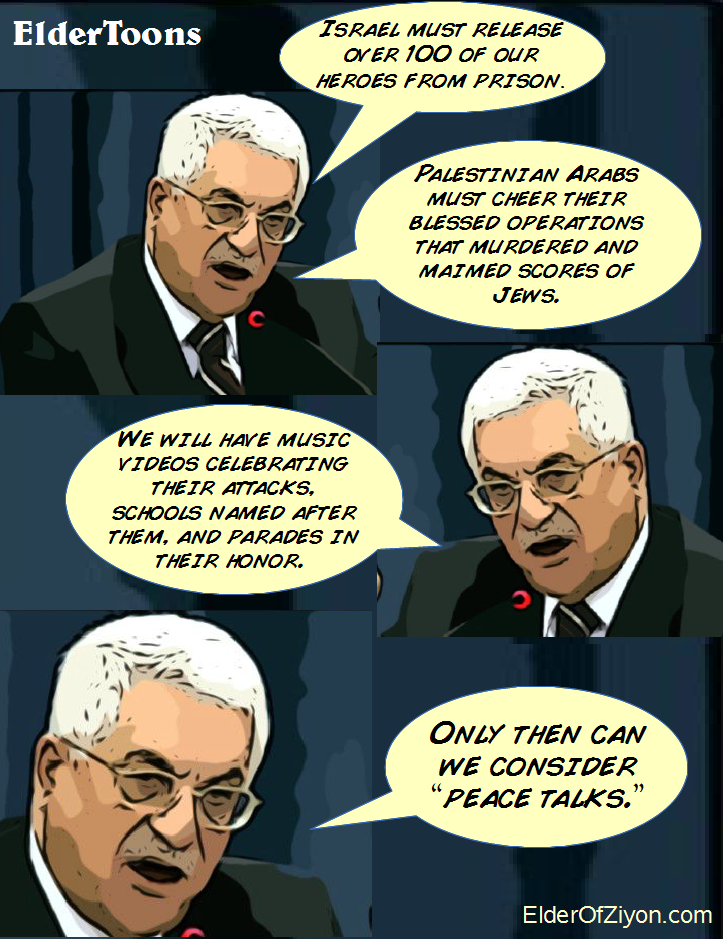 The mizrachi went along with Lapid and the left, so not to go along with their charedi brethren. This is a direct result.
Eat it.

Yeah Jameel. Your chareidi brothers didn't help you with Gush Katif either, and Shas voted for Olso.

Err, Mr. Unknown. Are you happy with this -- because it seems that you are.

How is this good for you? Or are you simply happy that this is bad for Am Yisrael?

I am as angry as anyone.
I am just lamenting the cause and effect.
Without Livni and Lapid, this wouldn't have passed.
How about Bennett quitting the government over this?
Nah, he needs to hit more on Charedim. That's more important.
Needs more reform-lite Stavs in Torah positions.

A Rav once said that the שנאת עם הארץ לתלמיד חכם described in the גמרא doesn't mean the secular Jew because it doesn't say כופר. It's the hatred that a mizrachnik has towards a Orthodox Jew.

With all due respect to Shy Guy,

I raise my hands - in sarcasm.

We'll be seeing peace in our time soon, too!

Unknown: Do you really think the whole point of Bennet in the government is to "stick it" to the Chareidim?

Not that I'm the defender of Bayit Yehudi (nor did I vote for them), but before the election, Bennet tried to form a dati-chareidi block with Shas and Aguda, and Shas said no way.

Did Bennett vote to draft Yeshiva Bachurim?
Did Bennett join with Lapid to exclude the Charedim from the government?
Jameel, you voted for Likud. Who voted for this travesty today?
Bennett is a wolf in sheep's clothing.
Thank God that Bennett didn't succeed in installing reform-lite, halachah-twister Stav, sham-conversions supporter as Chief Rabbi.

So much hatred, so few words. Mr Unknown, too embarrassed to write his own name, slanders a minister and a great Rabbi.

Because of hatred like yours the Beit Hamikdash was destroyed.

It is good that I put my faith in G-d, rather than in princes and nobles, or I would no longer be able to get out of bed.

fair friends, do you not see?
this wind plays into the coming of Moshiach. Of course it is painful to live through such things,The religious movement in Israel needs to learn a little lesson from Herzl
and his playbook. You have aspire to things which seems way outside the realm of possible to introduce real change. Where is the leader ready to do so?

fair friends, do you not see?

this wind plays into the coming of Moshiach. Of course it is painful to live through such things,The chareidi movement in Israel needs to learn a little lesson from Hashem and HIS playbook.

You have aspire to things which seems way outside the realm of possible to introduce real change.

Where is the leader ready to do so?