The Scent of a Politician

Former President Moshe Katsav was found guilty of two counts of rape, a forceful indecent act, and sexual harassment Thursday morning, with the leading judge calling him a liar. He was found guilty of every single charge in the indictment. Katzav declined a plea bargain of lesser charges, believing he would clear his name completely. 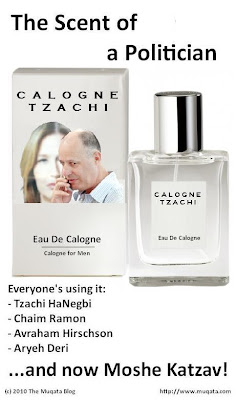 Kadima MK and party chairman Tzachi HaNegbi was convicted of perjury, yet tried to convince the court that perjury shouldn't be considered "moral turpitude," so he could remain a member of Knesset. He was thrown out of the Knesset.

I wonder if Katzav will go the same route...and appeal to the court to prevent him from being tarred with "moral turpitude."

Call me a ignorant that simply doesn't know enough, but why is Aryeh Deri on that list (what i say is obviously right for all of them, but have not been there judge and no Din Torah has ever had a say . . .). I really want to know, if you you don't feel like explaining, maybe you know a good source?

If you want to see what's published, google "aryeh deri jail" or look it up in Wikipedia.

David: Aryeh Deri was found guilty of bribery, and the conviction carried a clause of "moral turpitude".
YNET reported at the time:

Ynet has learned that former Shas leader, Aryeh Deri, who was found guilty on several charges of bribery in 2000, is expected to file an appeal with the Jerusalem District Court in an attempt to expunge the moral turpitude clause on his criminal record, so as to be able to enter the race for mayor of Jerusalem.

All the people on the list above have been convicted by courts for crimes carrying the clause of "moral turpitude."

- Tzachi HaNegbi was convicted of perjury.

- Avraham Hirschson was convicted of corruption and stealing close to 2 million shekels from the National Workers Labor Federation while he was its chairman.

And now adding to the list of convicted politicians who have received the clause of "moral turpitude" is Moshe Katzav.

Why hasn't Ehud Olmert been convicted yet? Why did attorney general Meni Mazuz who was so tough on Katsav go so easy on Olmert?

Eliyahu: Because Meni Mazuz is a leftist. He had mountains of evidence against Olmert, yet it took over 2 and a half years to indict him (and he threw out many of the other charges).

Israel is a corrupt country... if you're a leftist, in general, the prosecution and courts go easy on you. If you're the rest, they throw the book.

Most Israelis have little respect for those in power and even less for the guardians of the law. The conviction of Moshe Katzav doesn't change that perception much.

I know the facts, and Katzav's innocent!

(and so is my good friend Rabbi Motti Elon)

Actually, I know the facts said...

Aviner doesn't seem to be fazed by the fact that his name has also been mentioned for years in the same context. Maybe his victims will take strength and come forward now too. I hope that no woman or man who has been abused feels shamed into silence now that we have seen how even the campaigns of intimidation through the media of his many victims did not enable Katsav to walk away unscathed from his disgusting actions.

Katsav will be wearing the 'ot' kalon, more like the mark of Cain.

Joe- re R. Aviner- it is not that clear-cut.

The article on it last week (either Makor1 or A7) indicated that the case was closed and R.A. completely exonerated.