On Tu Bishvat we were visited by a youth group who came to plant trees. One of the groups had been playing Israeli Bingo on the way, with each card listing important people from Israeli history.

Not surprisingly, 99% of the names on the bingo cards were either pre-Exile or Zionist-era people. 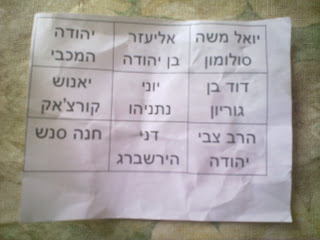 Therefore, I thought I'd use the opportunity to list some of the more well-known Israeli writers, scholars and leaders throughout the ages. Maybe next time I'll find their names on school-children's bingo cards.

Recently had a similar conversation about non-dati relatives who know so much more textual tanach then I do, but know nothing about Judaism.

and of your proposed list - only one woman, and from the 16th century at that!
not much of a message to half the jewish people that we can't come up with any woman in the last half-millenium or so ...

I'm almost finished with my next article, which will focus on an incredible woman. So, you're bursting into an open door :-)

But other than that - it's simply a fact that until the 20th century, very few women played a public part in world history. I can't change reality to fit any certain message.