The Pioneers of the Citrus Industry

Sometimes, one decision can make the difference between making history and becoming a footnote.

Dov David Fellman, a businessman from Mezritsh (Mezhirichi ), came to Israel in 1883, on a pre-Aliyah trip. He toured the land, visited the existing Jewish villages of the time, and decided to start off his own farm, and so set an example for others.

Becoming an Ottoman citizen so he could buy his own land, he bought 10 acres in the Arab village of Sumeil. Sumeil, more than an hour's donkey ride from the Jews of Yaffo, was located in what is today the 'old North' of Tel Aviv, between the streets of Ibn Gabirol, Alrozorov and Shlmo Hamelech.

In the winter of 1884 he brought his family to Israel - his mother, his wife Sarah Itta (his second marriage), and his seven children (ages 17 to 1). They were accompanied by R' Baruch Meir Rozenblum, teacher and butcher, and by the family's maid. 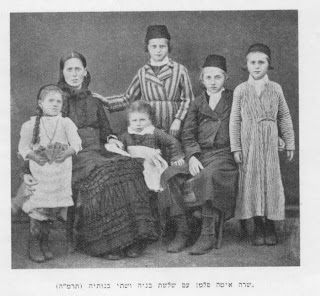 
David Fellman wanted to be prepared, and so he bought a few books before boarding the boat, and on the way over taught his family Arabic and read up on farming and agriculture.

On their new homestead the family planted an orange grove and on the rest of the land they planted wheat, barley and vegetables, and had cows and chickens. David would start off every day with his morning prayers and learning Mishnah, he would then go to Yaffo to sell his produce, come back, work in the fields with his two eldest sons, and end the day with the evening prayers and a page of Gemarah.

The Fellmans faced many hardships that winter, but the hardest for David was that, due to the Shabbat travel limits, he could not pray in a minyan (quorum) on Shabbat. Together with R' Meir he studied the Halacha and possible solutions. They went out to measure the 'techum shabbat' distances, but Yaffo was simply too far away. The first 'techum shabbat' ended on what is today Hamelech George street in Tel Aviv. The second ended where the neighborhood of Neve Shalom was later built.

But he was willing to put up with everything for his belief that this was his contribution to Redemption, and that once he blazed the trail, others will follow.

Well wishing rabbis tried to convince the new widow, just 27 years old, to go back home to Mezritsh. Rabbi Diskin of Jerusalem told her: "I've never told a Jew to leave Israel, but my advice to you is to leave. You're a widow with six orphans!" But Sarah Itta was determined to stay on the farm, her husband's dream and legacy. This was the land for which he died, and this was where she was going to stay. 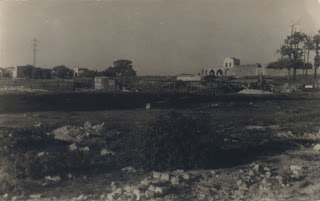 
Life was very difficult, but nothing deterred Sarah Itta. The farm was in debt, so she sold off her jewelry and got a loan from Rothschild. With time and effort the orange grove became a profitable business. Sarah Itta even surprised Rothschild by returning the loan.

When Baruch Meir Rozenblum, the children's teacher, left for other endeavors, she brought in other Torah scholars: Rabbi Shaul Shaulzon from Hebron and Rabbis Dov Marcus and Nachman Gedalia Broder from Jerusalem. The latter, who came with his wife, later became known as an authority on the Etrog.

The Arabs of Sumeil had a lot of respect for their new neighbors. When they first arrived, the village sheik, Muhammad Abu Jabra, would help David Fellman out and, at first using sign language, taught him how to work the land. When Bedouins stole something from the orange grove, Abu Jabra fined the robbers and the Fellmans donated the money to the village poor. Another time Bedouins robbed the house when the boys weren't home. The Arab neighbors heard shots and came to protect their neighbors, fighting throughout the night until they managed to fight the robbers off.

Another time an Arab child drowned in the farm's water hole. Arabs gathered from near and far, and a lynch mob started forming, accusing the Jewish family of killing the boy. But the child's mother stood between them and Sarah Itta "My son was as dear to her as he was to me. Woe to whomever touches her."

The older sons got married in Sumeil but once the grandchildren were school-age, they moved to the new Yaffo neighborhood of Neve Zedek. At the turn of the century, after fifteen years on the farm, Sarah Itta bowed to family pressure and moved to Yaffo. There she got involved with community and charity affairs, but she didn't leave her beloved farm - every day she would ride to Sumeil, supervise the workers and meet with her former neighbors.

In 1917, towards the end of World War I, the Turks forcibly evacuated Yaffo and the new city of Tel Aviv. Though the deportation order applied to everybody, the Turks turned a blind eye to the fact that most Arabs set up camp in the nearby orange groves.

The Fellmans hid their belongings in Sumeil, by Sheikh Abu Jabra. For a while they were in Kalkilyah (Qalqilya), where Sarah Itta set up a bakery for the benefit of the Jewish evacuees. They then moved north and settled in Tiberias, where one of the sons ran the concession stand in the Zemach (Samakh) train station.

In the 1930s, as the city of Tel Aviv grew, the agricultural land of Sumeil became valuable real estate. The Fellmans, like their Arab neighbors, were offered a lot by builders. In 1936, shortly after the family sold the farm, Sarah Itta passed away.

In 1934, the city of Tel Aviv celebrated the 50th anniversary of the establishment of the Fellman farm. Hundreds of dignitaries came from across the country and Mayor Meir Dizengoff and the city council crowned Sarah Itta "the pioneer of Hebrew citrus farming". 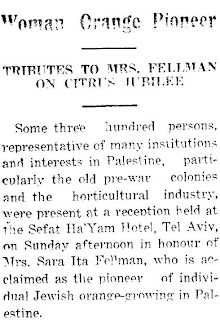 Anybody who visits Tel Aviv can visit the Fellman farm - today hidden under Rabin Square, the Tel Aviv municipality, Gan Ha'ir and dozens of apartment buildings - and honor the first Jews who lived here, who put Torah above everything, and who were convinced that Redemption will only come by buying land, planting an orchard and sticking it through.

[The pictures in this article were posted online by Sarah-Itta's great-great-grandchild.]

The Fellmans didn't come to Israel because they were getting free land; or improving their financial position through an investment; but because of a belief that Jews had a purpose in this world and that purpose was best fulfilled by living in the Land.

In that, they remind me of those few pioneers who returned with Ezra from Babylon (while most stayed behind in comfort); and began to rebuild under difficult circumstances.

Jameel, very nice article. This is what we appreciate reading more of. We (English speakers) do not need you to translate the ordinary news, as it can be read in the English papers and online. However, a nice article on research or history or early settlement or Midrash, etc., that might only appear in Ivrit would be very appreciated. The above is one that I've not heard before. I'm sure there are many more known mainly by the old-timers.

I thought the Aaronsons were the earliest Jewish agriculturists in the early days of our return to Eretz Yisrael.

I'm glad you appreciate this story. I hope to continue to present more stories of our continuous presence in this land.

We appreciate the efforts of our host Jameel, who enables us to understand the present, making sure we'll continue the chain. Not everything is available in English, and much of what is available, doesn't get to the mainstream media.

Jewish agriculture did not start from Aharonson, and not even with Fellman. Just a quick overview of the 19th century:
* Yisrael Beck established a farming village in 1834 on Mt. Meron
* Mordechai Solomon planted vineyards and orchards in the western Negev at ~1840
* Sephardi Jews had orchards around Ir David (Meyuchas Farms) during that time
* 1850s - British Consul James Finn established several farms around Jerusalem and Bethlehem where Jews farmed.
* Besides these 'newcomers', during this period there were still Jewish farmers in the Galilee, who had been there for centuries.

I hope to write more about Jewish farming in the future.

Sadly, most old-timers don't know about this story either.

What an amazing story; the real history of Israel that we just don't hear enough about. Thank you!

oddly perhaps your most moving piece
thank you