The Case of the Drunk Muslim

Not many history books were written in this land in the past 2000 years. Our history in this period is pieced together from Halachik writings, accounts of pilgrims and travelers, personal letters and government reports.

The two stories I bring below are very similar, though they come from different sources and different time periods, and they give us insight into the day-to-day difficulties of living here in previous centuries. Because sometimes, you could find yourself being charged for murder, just for selling wine.

The first story is from the Mamaluk period. In a letter written to his father in 1488, the Bartneura (Rabbi Obadiah of Bertinoro) had one good thing to say about Israel. People here are G-d fearing. Even the "evil and sinful" leaders of the Jewish community in Jerusalem, of whom he was very critical, would hurry to prayer and to do other commandments between man and G-d.

Here you won't find a Muslim who curses G-d, like the Christians in Europe do. The Bartneura points out this is the only thing that keeps this land from complete anarchy, since the Muslims have no order and no justice, and the courts do whatever they please. To illustrate his point he brings the following story:

A Muslim got so angry with his mother that he "slaughtered her like a sheep". When he was brought to court, he claimed he had been drunk.

If they had such laws in Europe, says the Bartenura, they would eat each other alive. 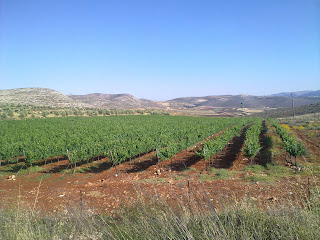 Renewing the tradition. Vineyards in the Shomron mountains.
The second story is from the Ottoman period, and shows that things didn't change much in the previous 250 years. This story appears in a responsa by Rabbi Nissim Chaim Moshe Mizrachi, the Chief Rabbi of Jerusalem in 1745-1749 (Admat Kodesh 1 Choshen Mishpat 72). The story is a bit convoluted, so bear with me.

Two Muslims fought in the market and one killed the other. The killer's family said in his defense that he had been drunk and had no idea what he was doing. The judge started investigating whether he had been drunk, and who sold him the wine.

Feyge was an Ashkenazi Jew living in Jerusalem. That in itself wasn't such a simple thing in those days. Twenty five years earlier all Ashkenazi Jews were run out of town after the community was unable to pay its debts. The Ashekenazi Jews left in Jerusalem all lived "undercover", pretending to be Sephardi Jews.

As it happened, Feyge, like other Jewish women in town, made a living by selling wine. And as it happened, one of the court officers had showed up at her house for several days with a big bottle, telling her he had been sent by the head of the Jewish community, and demanding she give him free rose-water. When she refused he threatened he'll get his revenge.

Finding this a good opportunity, the court officer went to Feyge's house and demanded money or he will finger her as the woman who sold wine to the murderer. Feyge had no choice and paid him off.

However, somebody reported Feyge anyway, and the city governor sent his people to get her. They didn't find her because Feyge went into hiding. The governor then turned to the head of the Jewish community and told him to find the woman, since he wants to hang her. As was usual at the time, this was just an invitation for negotiations, and the two settled on a sum of bribe money for Feyge's life. The Jewish leader, who did not himself have such a huge sum, then went looking for Feyge to get the money, but he couldn't find her either. 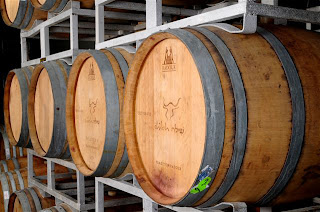 "Don't worry," said the governor's men. "We know other women who sell wine, we'll get the money for you."

The 'bribe-collectors' showed up at the women's houses and demanded they give them money, otherwise they'll inform on the authorities that woman sold the wine which led to the murder.

The money was collected, Feyge's life was spared, and everybody was happy.

Life was difficult, but the Jews in these stories don't come out smelling all rosy either. The Bartneura was impressed that people here were G-d fearing, but as he himself points out, fearing G-d doesn't make one a mensch.