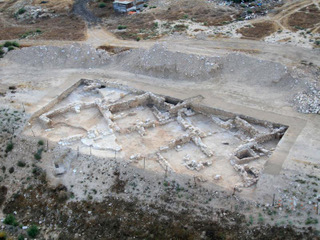 "Sadly, today most such discoveries are driven by construction work."

why sadly? what better testament to the vitality of eternal israel!

100 years ago all archaeological work was conducted by non-jews in a land marked by sparse jewish settlement. today it is sparked by jewish construction companies (ok, the workers may or may not be jewish) furthering yishuv ha-aretz on a scale unknown in all of history. (and when the archaeologists are called in, they are jewish.)

It's sad because it means we don't care about our history.

Construction companies definitely have no incentive to pay for it, and would rather bulldoze antiquities rather than call in the IAA. Do we really know how often that happens?

Even when the IAA is called in, when we're talking about a construction project, there's more of a chance that the site will be quickly excavated and then buried under asphalt or houses, instead of, for example - becoming an archeological park.

You once wrote a blog post about wedding ceremonies in Israel.

Well, the book which you referred to is now translated into English with some extra never before published notes from a manuscript.