8:13 PM Reports of over 30 Hizbullah terrorists killed in fighting today.

7:50 PM First tank made it's way out about an hour ago. IDF laying down supressing fire across the border area as equipment is brought in to tow second tank out. Major props to Fox News for covering the whole thing so well. 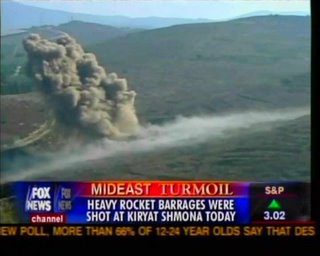 Minefield being cleared by Engineering Corps

5:45 PM Trapped tanks on their way out. One tank disabled by mine, no injuries. Explosion caused by Engineering corps clearing path for tanks to exit. Video when available.

5:16 PM 2 tanks stuck in mine field on Israeli-Lebanese border. Situation shown live on Fox news. An explosion went of near one of the tanks, no word of casualties, but soldiers seen moving around second tank. Reports of anti-tank missile fired, but not confirmed. 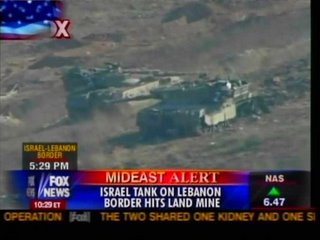 5:02 PM Commando units active in Western Lebanon, along the coast. Reports of casulties in heavy fighting in S. Lebanon. Further information when it clears the censors.

4:37 PM Reuters...mistaken again. They claimed Israel bombed a funeral procession in Lebanon. Nah, turns out they bombed targets in the vicinity, the funeral crowd was unhurt and able to chant anti-Israel and anti-US slogans. This story being researched as we speak! You heard it here first. I've located the updated post here still looking for the pre-edited text.

4:25 PM 4 rockets fall in open areas around Tzfat. No injuries.

3:05 PM There were noon-time sirens heard in Kiryat Shmona, Tzfat, Rosh Pina, Karmiel, Pekiin, Chatzor, and other places up North. A few rockets landed -- no injuries reported. the calm before the storm, since 3 PM is when things start heating up every day...

3:01 PM Sorry for the lack of postings...Jameel (writing this) is at home...and it's a tough day for us at work. Just wanted to update on this story from a few months back about Tic-Tac's and their Kashrut. There's now a class action suit against Tic-tac for it's Kashrut problems...

In the suit, filed with the help of Attorneys Dr. Avi Weinrot and Yaniv Aharonovich from the offices of Dr. Weinrot and Partners, the prosecution claims that the company broke the law which forbids marking a product kosher if it hasn't been granted a kosher certificate. "The law of kashrut is a law meant to protect the kosher-keeping consumer from kashrut fraud," it was written in the suit claim.

According to the prosecution, "It turns out that in many stores in the Tel Aviv area dozens of packages of the product which were manufactured after 1.1.06 have been sold with a misleading kosher symbol on their packaging. This is despite the claims of the company that they executed a massive recall of all the products already on the shelves." (YNET)

israel is have strong developed army
and stronger ally......but this not enough...why?
BECAUSE israel existence based on the force toward around nations this not natural.. the force and allys is not forever strong ...but the nations stay and not forget.
imagine israel without force or rise others force.
israel not do right from this day.
sow the evil reap the evil.

israel walk in the wrong way

I do not understand a word Watcher just said

That was a massive explosion (by the tanks). Scared me. Thank God everyone is allright.

i promise - i'm not scrutinizing your grammer or structure...

but the date at the top of this post says JULY 8 and really it's august.

i know, i know...this war is warping our sense of time among other things.

Abby - you are SO right. It's just pure exhaustion.

We'll try to be better in the future (and please keep corecting us!)