There was a funeral yesterday (Tuesday) for IDF soldier, Captain Benia Rein, 27. He was killed along with his crew in combat in Lebanon this past Saturday night when an anti-tank rocket hit his tank. Since I live in the Shomron area of the West Bank, I try to go to funerals for soldiers and civilians who are killed from our region. I never met him, but decided it was important to go to his funeral, to offer my last respects to him -- for he fell in service of our country.

Benia Rein's funeral procession started from his home (he lived with his parents) in Karnei Shomron. There was a large crowd -- at least a thousand people, as we stood in the hot sun listening to eulogies. Benia's coffin was draped with an Israeli flag, as it lay inside an IDF transport truck surrounded by soldiers on either side. 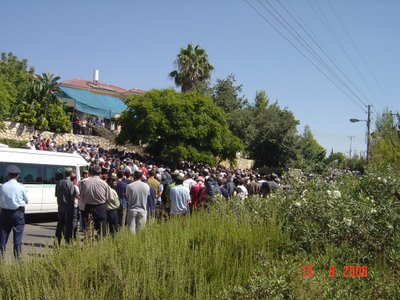 Outside the Rein's home in Karnei Shomron. 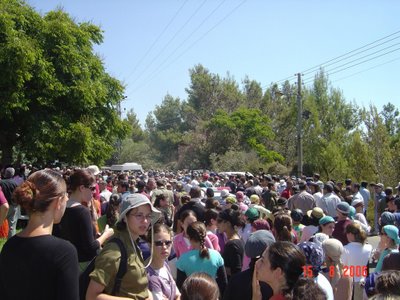 Over 1000 people attended the funeral. 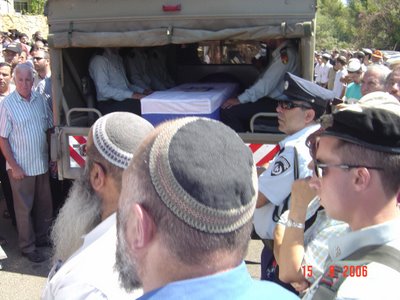 After the Rav of the yishuv spoke, Benia's friend and brother also spoke of his modesty, his character, and how he strove for excellence in everything he did.

I noticed there were lots of soldiers who came to pay their last respects -- except at this funeral, many of them were wounded and bandaged. One particular soldier caught my eye -- he was wounded in his neck and arm, and I could tell from his Uzi (and mega silencer) that he was from one of those "elite" units you read about that did alot of the house to house fighting in Lebanon.

From the Rein's home, the funeral procession followed the truck, as it drove to the local cemetery...about a 45 minute walk. After walking for a few minutes behind the truck, I got into my car and drove to the cemetery, where I saw the honor gaurd lined up, preparing to bring the coffin from the truck -- to it's final resting place for burial. The honor gaurd was comprised of soldiers who served with Captain Rein -- his brothers at arms. 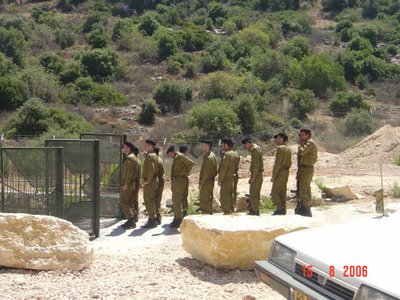 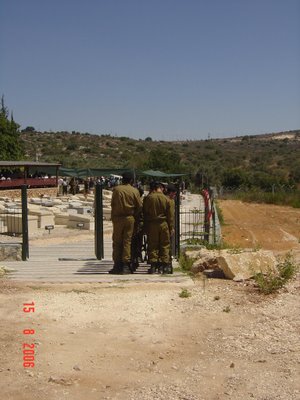 If it wasn't under such sad circumstances, I would have been able to appreciate the beauty of the landscape. The cemetery is surrounded by breathtaking scenery -- the green, rolling hills of the Shomron mountains. The Israeli flag flew at half-mast, as the third soldier in the military section of this cemetery was about to be buried. 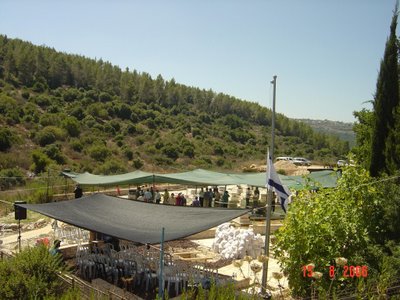 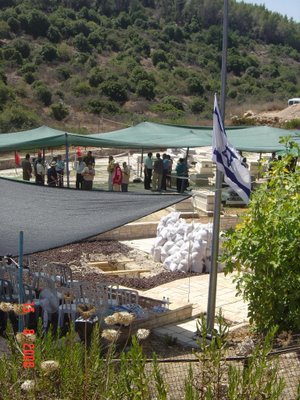 The truck carrying the coffin arrived, and the honor gaurd carried it towards the open grave as family members quietly cried...friends and soldiers looking on silently. 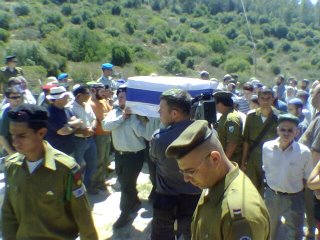 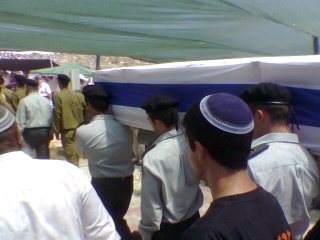 Gently lowering the coffin into the ground, the sobbing of the family grew louder, as the military rav said a chapter of tehillim. The chevra kadisha (burial society) quickly shoveled dirt into the grave, and the rest of the eulogies followed. Officer after officer spoke about the leadership qualities of Captain Benia, his lopsided, bashful smile, his determination to excel at everything he set his mind to, how he volunteered with developmentally challenged youngsters, how he was the tank commander that everyone could rely on. One of his commanding officers said, "It's unfortunate that such a cliche has to be used, but he was truly one of the best we have."

An officer from the paratroopers brigade was called to speak, and he said, "I only met Benia for 3 minutes my whole life, and that was last week on Friday when I gave him written instructions that needed to be brought by his tank unit to other paratroopers on the banks of the Litani. The impression he left on me after those 3 minutes, was one that I could rely on him 100%, and that he would do whatever it took to complete his mission....which he did." 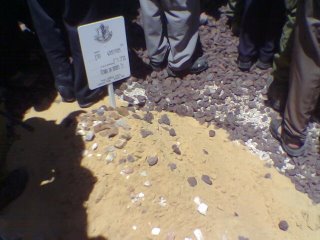 The final eulogy was from his mother, Chagit. She spoke about her son, his qualities, what made him special, and their last meeting together -- when she convinced him to let her drive him to the Israel-Lebanese border, 3 weeks earlier. She recounted that he would never let her drive him anywhere, but this one time, he relented. When they arrived at his base, he gave her a kiss on the cheek before getting out of the car, and then, he got out, walked around to the other side of the car, opened her door, and gave her another kiss. She was shocked -- he never acted like this before, and rarely kissed her. With tears rolling down her cheeks, she said, "Benia, why do I deserve 2 kisses?" And he replied at the time, "How lucky I am to have a mother who drives me to war...take care of yourself..."

And he was gone.

Chagit continued speaking, "Although my voice is breaking, and I'm crying now -- I turn to you, soldiers and officers of the IDF, and say, "Be Strong...be Brave...and continue the mission you were given, to protect our country and kill our enemies. Thought I am crying, do not despair, do not break, but as Benia would have wanted, go back, back to the front lines...and decimate our enemies. We will not be broken by Benia's death, but will continue to be pioneers, continue to have joyous occasions, continue to build the land...and we will continue to do all these things..."Bigadol" (in a big way).

There wasn't a dry eye in the cemetery, as she concluded her eulogy.

Final Kaddish was said, and the honor guard fired into the air. I took a short video of it with my cellphone...yet what I noticed as different, was that the shots that rang out...slowly echoed away into the distance.

Normally, when shots are fired the noise dissipates quickly...but this time, the sound slowly echoed through the hills of the Shomron, as yet another brave IDF soldier who died fighting for us to live in a Jewish state, was buried in Israel.

damn you, jameel. you're not supposed to make me tear up at work. It is so sad that we had to bury so many of our fine young men.
Hashem Yinkom Damam.

WOW I was just crying like a babey I have not done that in a long time. May Hashem bless the famaley of this holy solder H"YD

MOVING AND CRYING.
May God protect us from our enemies-

and from our government.

Thanks for sharing the funerals for the soldiers. A beautiful honor for such GOOD people.

I see David Blaine is there.

chagit's eulogy of her son just totally broke me up.
it must be the worst thing in the world to bury one's own child, and yet, in this case, what he did was the ultimate kiddush hashem.

we should totally annihilate hizbollah and all enemies of israel.

The official count of attendees at the funeral was just over 10,000.

I even had trouble getting in on my bike!

thank you for sharing.

wow. thank you for sharing that. It makes everything just a little more real and personal. Easier to feel the pain. Thanks again

I am crying reading this, remembering other funerals in Israels I attended for soldiers and victims of terror. Your descriptions are very powerful, and people need to hear this, to feel the sacrifice as a personal one. All the mothers I have heard at these funerals are always so strong, courageous like their sons in different ways. May Benia's soul be at peace and may his family be comforted...thank you very much for this post.

Heartbreaking. Absolutely heartbreaking. But how good of you to post this- it's something we all need to read.