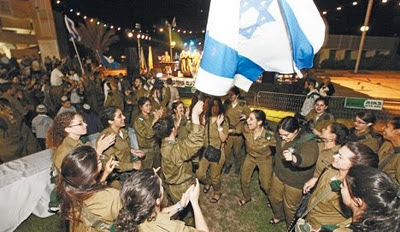 The above photo of happy IDF women dancing at Simchat Torah took place at the Haaretz report below...Haaretz didn't post this photo, since they made up their own story instead...

About 100 female soldiers left the main celebration sponsored by the Israel Defense Forces marking the end of the Simhat Torah holiday on Thursday after they were asked to move to a separate women's section.

The traditional "Hakafot Shniyot" event, which comes after the holiday's formal conclusion and includes dancing with the Torah, was held in the Eshkol regional council area in the south. The commanders of the women soldiers decided to have the women board buses and leave after some objected to their being directed to a separate area cut off from the main event.

The separate women's section was set off by cloth sheeting, but according to one of those present "it was very hard to feel connected to the event there." The event was attended by about 500 people, including a mix of civilians and soldiers, among them, about 100 women soldiers. Those in attendance said before the request was made for them to move, the women had been dancing at one side, separately from the men and also separated by a long table. The women soldiers were then ordered by an officer from the military rabbinate to go to a separate, closed area about 50 meters away, following complaints over the initial setup.

Orthodox Jewish religious authorities call for separation of men and women in certain circumstances. For many observant Jews in Israel, however, it is the custom for men and women at Hakafot Shniyot to dance separately but without the women being relegated to another designated area. The IDF's chief rabbi, Rafi Peretz, as well as the commander for the IDF's Gaza division, Yossi Bachar, were present but did not intervene in the matter. The rabbinate has been under pressure recently to adopt strict interpretations of halakha, Jewish religious law.

The IDF Spokesman's office said in response: "As is the custom at these events every year, there is an area designated for women," adding that "no IDF official was directed to verify that men and women were separated." The IDF rabbinate is unaware of some of the complaints made over the issue and the matter will be looked into, the spokesman said. (Haaretz)

Too bad Haaretz was more interested in writing an inflammatory article than in ignoring a non-issue. Following is a first hand, eye-wittness report, from one of the female soldiers present -- translated from rotter

"[Haaretz Reporter] Anshel Pfeffer wrote an article in Haaretz with a headline that hundreds of Female IDF soldiers angrily left a Simchat Torah event after being forced to celebrate in a segregated area. This is a lie and absolutely false.

I am a female IDF solider that was there in the Eskol Regional Council [at the Simchat Torah event]. The seperation was via long tables, which were regular table height, and they had food and refreshments on them. We all danced in merriment. No one thought there was an issue to mix the sides, because the dancing was similar to the hakafot (Simcaht Torah dancing) in a synagogue and not one of us [who were dancing] left.

There were some "Ashkenazi" soldiers who left because the event didn't interest them...and if anything, there was about 30 of them that left, not "hundreds".

Netanela
(phone number is with the rotter website editors)

I would add that when IDF cadets walked out from an IDF event of women singing, because it offended their religious sensibilities -- the IDF summarily threw the cadets out of their officers' course. Even though the Haaretz article isn't factually correct, why should the IDF soldiers and their commanders have gone unpunished for "angrily walking out of an event?" Not that Haaretz would ever ask such a question...

Leftists value tolerance and pluralism - unless it concerns a religious practice of which they don't approve.

Then they really get intolerant! There is a reason Jewish law bans mixed dancing. Maybe Haaretz doesn't have to like it but it should at least respect the right of IDF personnel to follow it.

Its not too much to ask.

A good opportunity for a joke

A modern Orthodox Jewish couple, preparing for a religious wedding
meets with their rabbi for counselling.


The rabbi asks if they have any last questions before they leave.

"Absolutely not," says the rabbi. "It's immodest. Men and women always
dance sepa-rately."

"So after the ceremony I can't even dance with my own wife?"

"Well, okay," says the man, "What about sex? Can we finally have sex?"

"Of course!" replies the rabbi. "Sex is a mitzvah a good thing within marriage, to have children!"

"What about different positions?" asks the man

"On the kitchen table?"

"Can we do it standing up?"

"Could lead to dancing!" Rabbi replied

Is Haaretz situated in Tel Aviv? Maybe when Hezbollah attacks next time, we could direct their missiles to the Haaretz building; it will be poetic etc justice!!

Larry, your joke is not funny because it so obviously misses the point. The objection is to public dancing, not dancing in general.

Larry's joke isn't a good one. Jewish law only frowns on intimate contact between unmarried individuals of the opposite sex in a public setting.

But a husband and wife would be permitted to dance together. Judaism praises marital intimacy but it discourages situations that could lead to violations of Torah law.

Nothing medieval or regressive about it.

Lighten up people. The only problems with Larry's joke is that it was funny 20 years ago when I first heard it, and he messed up the punchline.

The correct punchline is:
"Could lead to mixed dancing!" Rabbi replied.

And that's why the joke is funny.


But it's nice to see Larry trying to play nice for a change.

As for Haaretz: What a bunch of unprofessional hypocrites.

In other places of the world, gender segregation is promoted in public places by feminists and for the protection of women.

I love that someone makes a comment suggesting Haaretz gets bombed, and then the comment people object to is the joke! If I were writing a short story to lampoon this exchange, I couldn't have written it better.
Simply wonderful.

"I love that someone makes a comment suggesting Haaretz gets bombed, and then the comment people object to is the joke!"

I'm the first anonymous who responded to the joke.

I, for one, have been online long enough to filter out all comments of that nature before the reach the brain - there is not enough time to respond to every obviously offensive comment you see. The joke was rather badly executed, but still worth responding to.

Did anyone notice that in the rush to condemn Haaretz's inaccuracy this post's photo caption's claim that "Haaretz didn't post this photo ..." is untrue as a quick click on the posted link verifies?

A few may have, but that is not the point here:

1) The article was factually incorrect.

It seems like there were 2 mechitza situations at the dancing:
1. Separation by long tables
2. Separate area 50 m away with a cloth mechitza.

The Haaretz photo shows the women enjoying themselves in the 1st situation. Therefore it does not contradict the content of the article that the women were then asked to move a separate area and decided to leave.

Hardly surprising that they were annoyed by this.

Regarding the comparison between this situation and the IDF cadets who walked out of an event with women singing, there is a major difference. The cadets left a mixed event (possibly correctly, in my opinion) that was taking place in one physical space and at which their presence was significant. Consequently by walking out, their leaving and absence was very obvious.

Yet another "media is leftist" rant from the Muqata stables. And full of holes, what a surprise.

Yet another media is lefist rant?

1. Haaretz had a different picture up when I posted this story.

2. An eyewitness said that the women were not asked to dance separately, but the area was divided that way in the first place.

3. Michal: There was no sheet, and the women's area was clearly NOT 50 meters away -- you can clearly see from the picture that the women were adjacent to the men, separated only by a long table with food on it.

If people have to get so huffy over a simple table separation between men and women dancing for hakafot shniyot, then there is no hope for any religious celebration in the IDF.

A close relative of mine, an army Rabbi, was at the event, and he says that what Haaretz wrote is completely inaccurate. i.e. Haaretz lied. What a surprise.

My relative said that the Rotter story is closer to the truth than Haaretz. He doesn't deny that it's possible that some "putz" (he actually used that word!) told the girls to move aside but it is not the official position of the Rabbinate. He also said that there weren't 100 girls there in the first place so there couldn't have been that number who walked out.

As I said, Haaretz lied. I'm not surprised. Honest Reporting called them one of Israel's biggest enemies.

This story is being promoted on anti-Zionist sites with great glee. Haaretz have lent their hand to a huge chilul Hashem.

Honest Reporting are one of Israel's biggest enemies. Did you see that stupid Life of Brian video?!