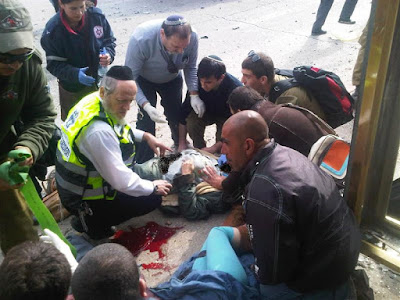 8:31PM Woman killed in bus bombing still remains unidentified. She might be a foreign worker or visitor to Israel.

At the Muqata we are wondering if this attack is related to the attack in Gilo 2 weeks ago where a sanitation worker was injured in a bomb explosion. 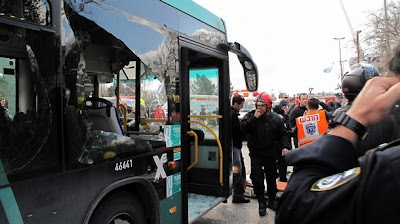 4:38 PM Kiosk owner near bus stop called police to report suspicious object at the bus stop. While on the phone with the police the bomb exploded. 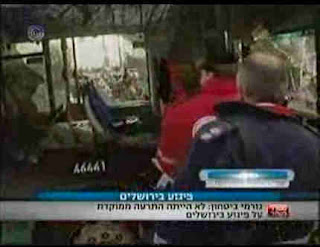 4:31 PM Bomb was approximately 4 pounds (1-2 Kilos) and filled with shrapnel.

3:55PM Police say it was not a suicide bomber. Bomb was apparently placed in the bus stop.

Jewish driver shot at 12:30PM near Revava in the Shomron. (YNET says that dead body was found in Revava).

Unconfirmed report that it was a bomb in the bus stop. Trying to confirm this.

3:21PM Around 15 minutes ago a bus exploded in front of Binyanei HaUma (Jerusalem Convention Center). More detail to follow.

Medical personnel being evacuated due to threat of additional bomb on site.

Phone lines have crashed around the country (but seem to be up again).

Police concerned that a suspected second bomber is walking around the area.

Police checking all cars parked there for additional bombs.

rumor is that it was not a suicide bomber, but a bomb left on the street next to a kiosk.

why is sky news.com saying 2 people might have been killed? please, please tell me this isn't true

MDA is reporting NO ONE died, however, 4 possible critical injuries.

Please remember this is all breaking news, and the story will become clear in a little while.

Enough of the Arabs, send 'em away from Jerusalem, the Shomron, everywhere. It's enough already. If we're going to be accused of "ethnic cleansing" by the likes of Falk, let's do it already. Get rid of 'em, build a really complete wall, build the country from top-to-bottom and fill it with Jews, make it Arab-rein.

I know it sounds terrible, but it's enough that Israelis should have to live under this kind of threat after all these years.

Just texted Kovi. He said there were bombings in Ashdod and Beer Sheva too? Can't confirm.

Its still easy to smuggle bombs into Jerusalem. The barrier in the Jerusalem area is still not completely finished and won't be for several years but there's no doubt it saved hundreds of lives.

It could easily have been a bloodbath today. That construction needs to be sped up.

As for the terror attacks in the South, Hamas apparently is forgetting the lessons it learned in Operation Cast Lead. While Jews can be dense at times, they at least know right from wrong.

The Arabs have not made any moral progress since they came to Islam. As long as they think the way they do, they will pay the price for living in moral darkness.

These people who commit these attrocities are evil demented monsters. (this is my subtle version - what I would really like to say, isn't fit for gentle ears).
Israel, you are all in my thoughts.

This is so sad. My heart goes out to the victims' families and friends. Sometimes, even using a mobile phone could trigger a bomb, whether or not you're using a phone card australia to make a connection.