The residents of Rajar. 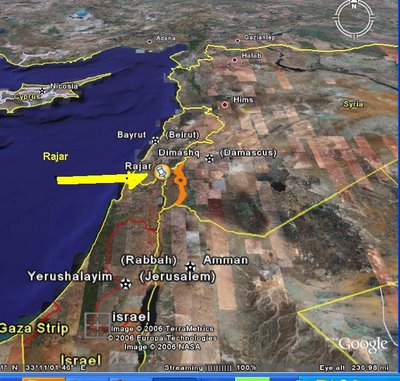 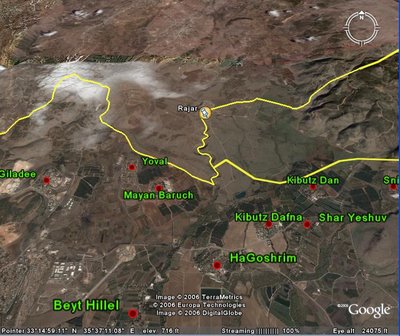 Rajar is a village on the border of Israel and Lebanon/Syria, which has been part of Israel since 1967. It's residents are Israeli, vote in Israeli elections, receive their services from Israel...and till today -- had IDF soldiers stationed in their town.

About 2,100 residents live in Ghajar, some 1,550 of them in the northern part, the latter were surprised to hear in the media about the government's decision that they will be supervised by the United Nations Interim Force in Lebanon and that IDF soldiers will be stationed on the 'Blue Line.'

But the residents have nothing to worry about.

The National Security Cabinet has decided to adopt the proposal calling for Israel to withdraw from the northern part of the Lebanese border village of Ghajar and to hand over responsibility there to the UN peacekeeping force in southern Lebanon.
I'm sure they'll be able to sleep soundly now.

I'm confused... do they want to be Israelis or not?

From the article, "They are seeking to correct the historical mistake, and stress that their village was occupied by the IDF in 1967 along with the Golan Heights territories, and therefore they in fact belong to Syria , rather than to Lebanon."

So they're saying we should protect them until they decide they want out, and then we have to let them go?

Mike: They are between a rock and hard place.

I think they definitely want to be part of Israel. The best chance they have is to claim they were part of Syria, so that they are part of the Golan. This reduces the chances (for the time being) of being abandoned. If they are part of "Lebanon" -- then it's much easier for Israel to abandon them.

Then shouldn't the complaint be that they were captured by Israel from Syria, instead of that they belong to Syria?

I realize this is an open issue, but why would they pick the anti-Israel side if you're trying to endear themselves to us?

Unless, of course, that's ynet's paraphrase and not anything resembling a real quote.

"Partial List of people backstabbed by the secular State of Israel"

One more item for your list: THE JEWISH PEOPLE!
Do not think, even for an instant, that the DISASTER of Gush Katif is an afront only to the 8000 Jews kicked of their homes, all of Israel, the entire Jewish people suffers because of it. Whether or not people realize this truth, we are paying for it, and dearly.
The Arab claim over the Land of Israel has been given the official seal of approval by no other than Ariel Sharon himself. What do we expect now? Kisses and roses?
Antisemitism and assimilation rise to new hights in the world, and Israel's security is seariously compromised.
Then comes, of course, Olmert's criminal incompetence during the new Lebanon war, and immediately after, RACHAMANA LITZLAN, he goes on to tell us of his plans to reward the Arabs with more land, more weapons, more money...
Haven't we had enough?!

So Ghajar's been screwed. In the long run, actually defining the border can be good for Israel, but this village needs to be on one side or the other, with no ambiguity.

This Hebrew Wikipedia article discusses their history. After the Six-Day-War, they were not part of Israel or Lebanon, so they requested that Israel include them. It wasn't until a number of months after the war that the Knesset decided to include them as part of the Golan.

Keep in mind that the only Rajarians pay lip service to Syria, is that they know if G-d forbid, they ever get returned to Syria (with the Golan), then they will be killed if they aren't "loyal." Same thing with the Druze in the Golan. They would love to be 100% loyal to Israel in terms of their speech, but know full well that Israel may stab them in the back as well one day, return them to Syria, and if they weren't vocally loyal, then they'll be shot.

"they know if G-d forbid, they ever get returned to Syria (with the Golan), then they will be killed if they aren't "loyal." Same thing with the Druze in the Golan."

i've heard that the israeli druze fight to the end for this reason. jews have a chance of being taken as pows and eventually repatriated. they will be tortured and killed with certainty.

I think that Israel has a moral obligation, due to the loyalty of the Druze and folks like those of Ghajar, to really address the various civil rights issues with the Arab-Israeli population.

Add Shalit, Regev, and Goldwasser to the list of those stabbed in the back by Israel.