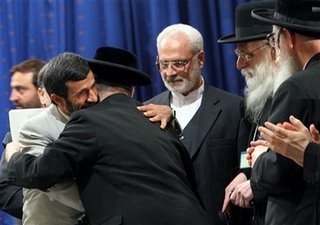 With all the outrage against some fringe Neturay Karta Jews who attended a Holocaust Denier's convention in Iran...including calls to have these Jews charged with treason, you would assume equal treatment to anyone who panders, hugs and kisses Holocaust Deniers, right? It's not like the Neturay Karta people said there WASN'T a Holocaust...but they attended to further their own agenda -- and yet, this upset everyone.

Yet when other Jews kiss, pander, and offer $100 million dollars to other Holocaust Deniers, then the world is strangely silent. In fact, some are overjoyed...look at the smiles on these people's faces. 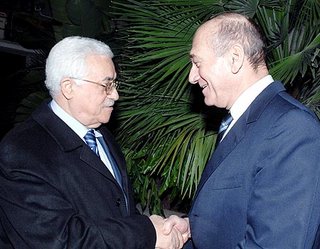 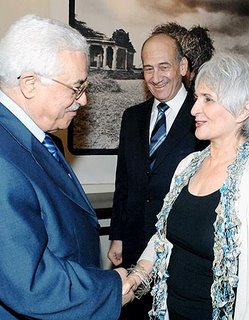 Photos courtesy of YNET. They report:

Olmert gives Abbas a warm welcome Saturday evening, with food and kisses. Palestinians surprised to find Palestinian flag and Israeli flag standing side by side in PM's driveway; the two flags found together on table inside house as well.

Olmert insisted on leaving his home to welcome the President and his convoy with kisses. "It is my pleasure to welcome you, Mr. President," said Olmert to Abbas.

The Palestinians were surprised to find the Palestinian flag and the Israeli flag standing side by side in the PM's driveway. The two flags were found together on the table inside the house as well.

This is the first time that Palestinian flags were waved inside any official Israeli institution, not to mention the prime minister's residence.

Even senior officials at the Prime Minister's Office found this hard to believe; Palestinian flags in the heart of a Jerusalem neighborhood.

Olmert's men explained that the warm welcome and the Palestinian flags being raised alongside the Israeli flags were meant to prove that there is no patronization on the Israelis' part, and that they were negotiating with Abbas because they truly believe he wants peace and they hope to make him a real partner.

"Abu Mazen," said Olmert's men, "was welcomed at the prime minister's residence just as any other head of state would be."

I'm sure that the IDF soldier, Gilad Shalit, held hostage for months in Gaza appreciates the warm welcome that Olmert gave Abu-Mazen. I'm also sure that all those who lambasted the Neturay Karta and insists they be tried as traitors against the Jewish people for associating with Holocaust Deniers, feel the same way about Aliza and Ehud Olmert.

Right? Otherwise that would be hypocritical...

I left out all the hugging and kissing stuff in my post on the subject.

I don't know why "Even senior officials at the Prime Minister's Office found this hard to believe; Palestinian flags in the heart of a Jerusalem neighborhood." after all, that is what this is all leading up to.

The Olmerts and their cronies have long lost any sense of morality.

Moshe Feiglin (your buddy) wrote similarly in his article this past week, asking (from my memory) why everyone is so critical of these NK guys when Yitzhak Rabin, Ehud Barak, and Binyamin netanyahu all shook hands with, and some hugged, Yasser Arafat and others of his ilk. When they do it as heads of state it is ok but as a few deranged indivduals representing nobody it is criminal?

Somepne please tell me how Olmert is still in power. It defies logic.

Actually I think you'll find that Katie-Yael (and others) took issue with the NK for snogging a man who has openly and repeatedly called for the obliteration of the Israeli state (where they and their fellow Jews happen to live, thereby actively encouraging death and destruction) as opposed to due to their Holocaust Denial.

Anyway, whichever way one looks at it, and wherever one comes from on the religious/political map, I think we can all agree with "Shtender": Olmert's continuing reign simply beggars belief.

I've read this here and there and I think as most people are getting angry, I'm just really really sad. These people, be they neturei Karta or whomever, LOST people in the holocost. Whether or not they support israel...I think they lost some serious sight that what they're doing has nothing at all to do with israel. Huge chillul hashem. Disgusting.

Yes ... that is exactly how I feel. Although I feel more critical of Olmert doing it than I do (in retrospect, did) of Rabin having done it.

How Olmert looks at himself in the mirror every day and doesn't take his own life (G-d forbid) is an enigma to me.

Since we are blessed (or cursed) with Israeli leadership that has zero connection to any biblical roots,,everything that transpires just SMEELS!!!!! zionflag

sorry to be so descriptive, but that basically sums up all of my feelings on the subject of those who embrace holocaust deniers.

I dont think its an accurate comparision bt those who attend a holocaust denial conference and individuals who are mute deniers.

Loyalist- No, of course I didn't vote Kadima. You clearly don't read my blog.