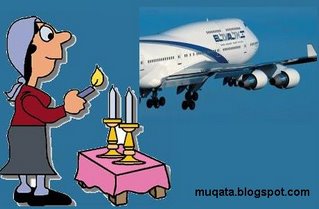 On my way home from work last night, I was listening to the "Kol Chai" radio station, and heard the following halachik proclamation in the name of R' Chaim Kanievsky (shlita): "Because ELAL flies on Shabbat, flying ELAL is now a safek pikuach nefesh" (roughly translated as: possibly life threatening) -- and as a result...a Chareidi boycott against ELAL is looming.

Last week, ELAL flew many planes on a very late schedule -- with flights flying and landing on Shabbat at Ben Gurion Airport in Israel. The reason for the Shabbat flights was that ELAL trying to "catch up" to their schedule after the Histadrut's Labor Strike last week, which grounded the airport, thereby preventing all incoming/outgoing flights.

The reason for the strike...happened to have been very justified (for a change). Prime Minister Ehud Olmeret's government has refused to pay the salaries of municipal workers in different cities -- with some have not received a salary in over five months. Think about that for a second. Salaried employees, even some who work for the chevra kadisha in certain municipalities as well, have not received salaries for FIVE months or more.

This is the same Olmert who heartlessly continues to refuse housing and job solutions for the people kicked out of their homes in Gush Katif more than 15 months ago. (Hey OU, are you listening?)

So, in typical domino-effect fashion;
So...the Chareidi world is on the brink of calling for an economic boycott against ELAL.

Now, I've posted before about ELAL and how I think they're a decent airline (or perhaps, mostly to their business customers), but they really dropped the ball on this issue.

Unfortunately, the Chareidi world is also blowing things out of proportion by not even trying to talk to ELAL. ELAL is no longer the "State Airline"...and they "desecrate the Shabbat" every Shabbat on all sorts of flights run by the airline, but not with the name ELAL on the plane.

More so, ELAL's competition in Israel also flies on Shabbat...

Lastly; there are all sorts of companies in Israel that operate on Shabbat, but I don't hear the Chareidi community calling for a boycott against them;


And there are many others.

While the Chareidi community usually "tries to solve issues quietly" -- I think in this case, it might have the the right way to go. This boycott is going to be a slippery slope; and where it ends is a big question.
And more.

UPDATE 5:20 PM: Reported on Walla & IDF Radio, the CEO of ELAL, Chaim Romano just said something incredibly stupid at a Tourism Conference. "We will continue to fly on Shabbat under certain circumstances. We expect the religious community to accomodate us, just like we accomodate them."

He could have apologized. The slippery slope has started...

Coincidence Update? (5:26 PM) ELAL Jumbo 747, Flight 007 from TLV to JFK just made an emergency landing on runway 26 at Ben-Gurion airport, after fire and smoke were seen coming from one of the engines shortly after take-off.

The plane dumped 150 tons of fuel over the Mediterranean, circled around and returned for the emergency landing. Flight should take off again in another 90 minutes...

BTW, did R. Kanievsky protest the non payment of salaries?

Where possible, many chareidim certainly try and avoid (Jewish) companies who work on Shabbos. For things like electricity and/or busing, that may not be possible (although many do have private generators on Shabbos and avoid Egged in favor of "mehadrin" lines). When it comes to entertainment, I can recall many calls to avoid patronizing establishments that are open on Shabbos, and flying, especially when there are alternatives, and it's not an essential service.

Whether El Al is a formal state airline or not is somewhat beyond the point; it's clearly not just a regular Gentile corporation, and thus, is requested (by an legal and moral economic threat) to abide to higher standards. Keep in mind, most (probably all...) chareidim request mehadrin meals on El Al anyway, so it's not like the Kosher food is really that important of an issue in practice; it's a matter of principle.

Some may argue that El Al is a safer airline, and thus cannot be replaced by Israir etc. I think this was the reason for the point about the extra "Shabbos protection." Normally, the fact that El Al is threatened more than any other airline is offset by the extra hishtadlus + the extra shmirah. Without that shmirah, perhaps the hishtadlus vs threat ratio is not high enough on El Al.

And re. the Olmert bash: my understanding was that the municipalities didn't pay, and the national gov't said they won't bail out the municipalities, since otherwise, they (the local gov'ts) will just go ahead and screw up again and again.

Keep in mind, most (probably all...) chareidim request mehadrin meals on El Al anyway, so it's not like the Kosher food is really that important of an issue in practice; it's a matter of principle. Matter of principle? ELAL already flies on shabbat (and has for years) on many routes through their subsidiaries and cargo planes...as does ELAL's competitors.

The question is; will the boycott cause more or less chilul shabbat? Are they really interested in smoothing things over with ELAL? It seemed to me from the radio interview that there was no intention to "climb down from the tree" (hmm, does that expression exist in English? I've forgotten :)
and abandon ELAL completely.

Matter of principle? ELAL already flies on shabbat (and has for years) on many routes through their subsidiaries and cargo planes...as does ELAL's competitors.

True, and we all know how they cancel and rebook on their subsidiaries for a too-close-to-shabbos flight. Nevertheless, it's the principle of having the (semi-)official airline (semi-)officially keep shabbos. You've complained in the past about Israeli politicians who are mechalel shabbos in public; do you want their private cell phones taken away? Of course not, but you don't want them doing it in public.

The chilul Hashem here is not chilul shabbos, but sanctioned official chilul shabbos. I heard the same clips, and I think what we're hearing now is political posturing, not a long term negotiating stance.

Ironically, this seems like an issue the DL/chardal world should be more upset about, since we tend to attach more significance to official (or ex-official) symbols than the chareidi world does.

On another note, since climbing trees is assur on shabbos, then climbing down is probably also not a good idea... ;)

I shouldn't comment here as I am only going to fan the flames.

The Charedim need to give it a rest.

If I may toss in my two cents, at least about the Israel Electric Company. Happens to be that I know the chairman, (we go to a shiur together). He's relatively new to the position and fired the people responsible for moving the turbine on Shabbos. He's a frum yid and can definitely be considered yode'ah sefer. He's spent the last several weeks, since the turbine incident, in consultations with various halachic authorities about how to make sure there is no Chillul Shabbos at all in the IEC. He's consulted with R' Chaim Kanyevsky, R' Elyashiv (without R' Efrati present), R' Ovadiah, R' Shteinmen etc. He's really making a serious to clean it up, including having a non-Jew in place where ever needed on Shabbos to deal with any emergencies.

The chiloni response has been unbelievable. I could not believe the anti-Charedi bile that was spewed in the YNet talkbacks and other rplaces. I posted more about this here.

so even in a jewish state there still must be a shabbos goy? i guess israel really does need the arabs, thais, romanians, etc.

when i was in yeshivah, which happened to be on a kibbutz with cows, we came to to the topic in one shiur about milking cows on shabbat. the rav (himself a kibbutznik) disucessed with us the various suggestions that were made to religious kibbutzim on what to do with this problem. one suggestion was to rely on a shabbos goy. this suggestion was rejected outright, both on principle (avodah ivri, which of course is no longer an issue anyway) and considerations of halakhah. (i don't remember the specifics)

When it comes to entertainment, I can recall many calls to avoid patronizing establishments that are open on Shabbos, and flying, especially when there are alternatives, and it's not an essential service.