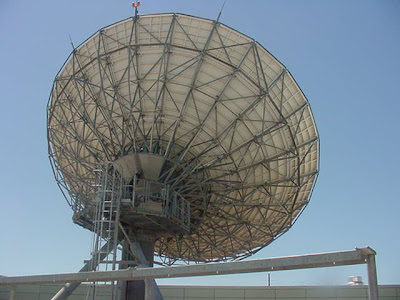 Scan any Israeli alternative news website, and you'll see complaints from all over Israel about poor reception issues from YES, the Israeli DBS (Digital Broadcast Satellite) TV service -- what is supposed to be DVD-quality, crystal-clear reception has turned into a pixilated, garbled signal.

Beirut's "Variety" news site picked up on the story and has linked it to Israel's , , alleged attack on Syria last month.

BEIRUT -- Watching television in Lebanon and Israel has become a jarring experience over recent weeks.

Frustrated viewers have inundated their cable and satellite providers complaining that the onscreen images constantly flicker and freeze. Analysts on both sides of the border suspect covert military activity but, like any good Middle Eastern story, theories abound as to who is the culprit.

The onset of the problems coincided with a Sept. 6 Israeli air raid on Syria. Television signals began to deteriorate shortly afterward and on Sept. 12, Lebanon's Telecommunications Minister Marwan Hamadeh told local daily An Nahar that interference had "started with the aggressive Israeli infiltration on Syria."

But by Sept. 20, Israeli newspaper Yedioth Ahronoth, which also linked reception problems to the raid, reported "Syrian espionage activities on northern Israel using Russian experts" as a possible cause of the disruption.

A third theory emerged on Sept. 23 when satellite industry publication Rapid TV News cited reports that strong radar signals were being generated by "various intelligence elements, chiefly Western countries, which are trying to fathom the intentions of Israel and Syria in the near future."

Now, after web reports on rotter.net earlier this evening indicated that a ship might be involved, the latest report from Channel 1 Israel TV (via Walla) is that a ship flying a flag from Holland is responsible for the interference.

Was it working for Russia? Syria? NATO? Or perhaps an illegal Phlippino Gambling operation? We'll see how this story unfolds...

who has time to watch t.v. anyway when there is blogging to be done.

Didn't you learn your lesson 2 years ago about Manilla?

Stop trashing us... or else.

I just visited your blog at "http://muqata.blogspot.com/2007/10/israel-yes-satellite-tv-interference.html" and found an interesting one for content link exchange with my website. As your blog is relevant with mine so it would beneficial for both of us and in this way we can also increase our back links. If you also find it suitable then please let me know at- ami.roberts86@gmail.com