The Ultimate Jewish Graffiti in Gaza

Trust me, this is cool. 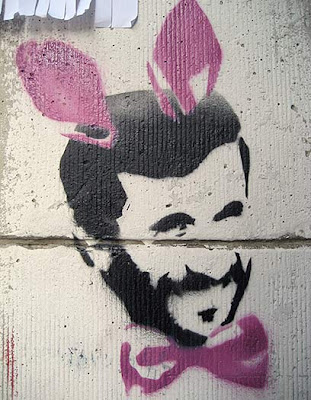 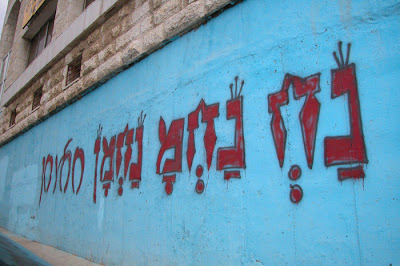 (Photo Abba Richman)
It's not even the Wizards of Oz... 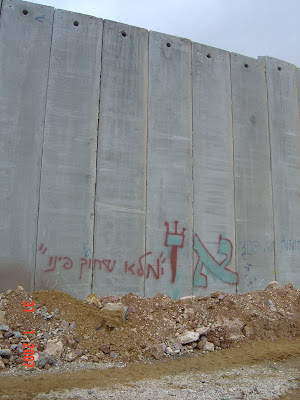 (You'll see, this is totally cool).

Gaza's airport, known as "Dahaniyeh" or "The Yaser Arafat International Airport of Peace" looks rather impressive based on it's webpage.

Truth be told, the airport has seen better days. In it's days of grandeur, the EU pumped millions of Euro into this Palestinian weapons/terrorist/drug smuggling center. Sounds like the sort of airport where security was sort of like this:

(The real clip I wanted to use from "Airplane!" of terrorists running through the metal detector, and then the security guards beat up an old lady who beeps when walking through)...or the "Spinal Tap" airport security clip [hamayvin yavin])

Seriously though, after the Palestinian Authority continued launching terror attacks at Israel, IDF forces "shut down" the airport -- they bombed and bulldozed it back into the stone age.

Seems like some of the IDF D9 bulldozer drivers have a sense of humor (or at least some nationalistic pride). 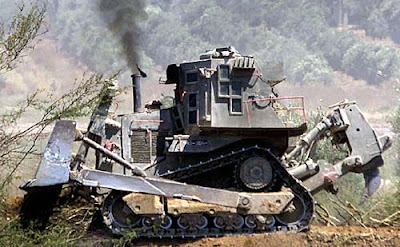 Go to Google's web based satellite maps. (maps.google.com or use Google Earth) to the location of Gaza's runway.

If you don't want to bother looking it up on your own, keep reading...

I've saved you the trouble; the exact location is below.

Do you like the Magen David (Jewish Star) bulldozed into the runway?

Zoom out to see it in relation to everything else.

Why, that's always the signature Israeli jets leave after a bombing run.

Interesting...I told Matt the reasoning about A.Z. I guess the truth wasn't interesting....

so they run us over and u think its cool?

aaaaaaaaaaaand thanks for the airport security clip--just LAST NIGHT i was looking for it and was a tad frustrated that i couldn't find it.

I found your cute blog when I was looking for the article on Peres and Streisand (he's a star struck idiot)! Love the runway photo.

Both the runway photo and the security clip are way cool.

The video's the funniest.

Thanks for this, J. But especially for the opportunity to pan around a little on Google Maps. I found this
http://tinyurl.com/32un5z and shed a tear.

I don't think you'd be that impressed by the sense of humour of Hamas if they bombed Ben Gurion airport in the pattern of a crescent.

It'd be better to have some sympathy for your Palestinian neighbours, rather than mocking them.

What a deranged bunch of people you are!

And you still wonder why most people don't support the Israeli 'cause'?