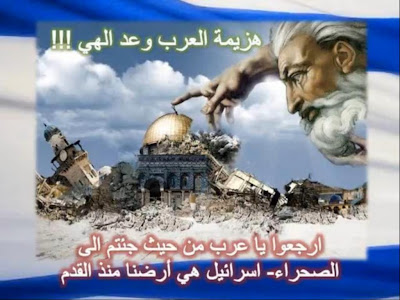 As the Arab world gears up for violent "Naqba" (catastrophe) demonstrations against Israel, it's time to put things into perspective.

Naqba Day is commemorated on May 15th, the day on the Gregorian calendar following Israel's Creation on May 14, 1948.

Israel extended its hand in peace to the neighboring Arab countries. On May 15th, the day after Israel announced it's creation, all the Arab countries surrounding Israel declared war on Israel and attacked.

Despite the overwhelming military force of the Arab states, the fledgling Jewish State won the war. Hence the Naqba...the great "catastrophe" of the Arab world.

Our survival is their catastrophe. Had there been no Naqba, the Jewish people would barely exist today.

So while the Arab world violently commemorates their failure to destroy Israel in 1948, we should and we must celebrate the ongoing existence of the Jewish State.

Naqba sameaH to you too!

I'm not sure that it's accurate to say that "the majority of the world's Jewish population would have faced annihilation". Were there really that many Jews living is Israel at the time?

Oh, and please remember that it's TWO days of celebration outside the land.

I think Naqba celebrations are great! A barbecue is in order...Watching the annual celebration of Arabs-getting-their-butts-kicked-by-Jews-militarily makes me proud. They tried to kill us, we won, let's eat!!