A few days ago, someone sprayed graffiti on a mosque in the West Bank village of Nabi Alias (located only 1 kilometer from "Checkpoint Eliyahu").

The graffiti read, "Mohammed is a Pig"

As we have witnessed in the past few weeks, its depressingly obvious what the reaction was bound to be. Support for Hamas has been growing over the past few years in this small town, and it should be a surprise to no one that a full scale riot ensued.

It's important to note that graffiti on mosques is not something blasphemous in and of itself -- I took these pictures of Hamas graffiti on the wall of the other mosque in Nabi Alias. Scary stuff. 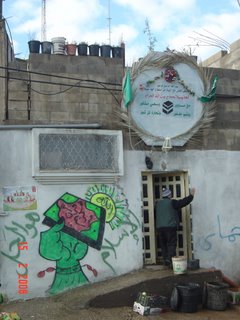 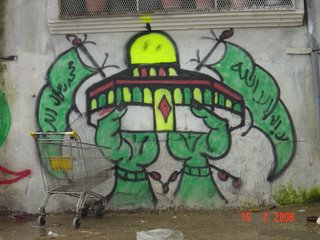 As anger was directed towards Israeli civilian vehicular traffic, rocks were thrown at Israeli cars, tires were burned in the streets, and the IDF and Civil Authority officers came to the village to calm things down. High ranking IDF officers personally cleaned the graffiti off the wall, and it took till the rest of the day for the rage to subside. 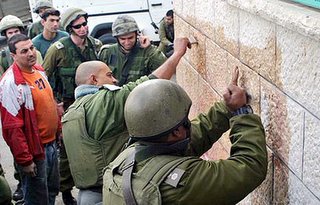 Along the road, 5 people were hurt by rocks, many cars were damaged, 3 Palestinians were shot in the legs by the IDF, and it was a rather crazy day for everyone.

What honestly surprised me was, "who did this?" This particular area of the Shomron is rather calmer then the "Gav HaHar" section of the Shomron, and it seemed very out of character that someone would vandalize a mosque this way. I could imagine a particularly hot headed settler doing this near Chawara, but not so much in Nabi Alias.

Which got me thinking; what was the outcome of this graffiti?

1. Outraged Palestinians stoned cars, people were hurt, anger vented at IDF
2. IDF upset at alleged settler who did this.
3. IDF cleans off the mosque. (Though the PA never cleaned off Kever Yosef after it was destroyed, or even bothered defending the shuls in Gush Katif)
4. Israel sees that crazy alleged settlers attempted to inflame Arab hatred.

Who stood to lose the most? The settlers.

Who stood to gain the most? Those who want to portray the settlers as bad.

Before you say, "stop with the stupid conspiracy theories" -- just ponder this one thought.

The Shomron settler communities adjacent to Nabi Alias are relatively quiet and don't do this sort of thing. They are ALSO not included in Kadima's plan to remain under Israel's control (read: Future Victims of the Planned Disengagements). So, when you want to convince Israelis that these are the "bad" settlers who need to be evicted, what could be more convenient?

Oh, and if anyone has connections to the CIA, next door to the mosque is a curious sign advertising Osama's garage. (also in Nabi Alias) 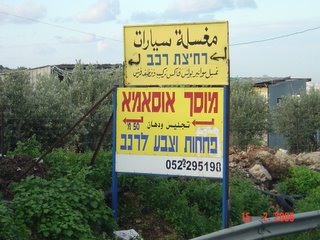 All you need to do is contact the CIA and collect your reward.

i don't know why it would be considered "conspiracy theory" if it is the left setting up the settlers. if anything, it sounds like a very possible branch of reality.
but then again, the possibility of the "palestinians" doing it just to enrage their own people sounds pretty likely too, what with all that's been going on in the muslim neck of the woods.

The real Osama would have spelled it "Bachacut" (with a Bet). I hope the CIA knows at least that.

Yeah, I hate to dive into conspiracies, but I vote Shabak the blame as well (this wouldn't be the first time).

It is all bad.

Actually, the real question is not who wrote the grafiti, but who would have no reason to write it.

Someone who didn't want a riot, did not write that grafiti.

The population in that village acts in a depressingly predictable fashion, obviously.

I'm guessing that their dialect of Arabic may not yet have words for valium and common sense.

I think it's a busha that IDF soldiers were scraping down the side of the mosque while the locals looked on.

Apparently the locals can't do it themselves.

Has the government find yet another degrading and inappropriate mission for our defense forces to successfully complete?

At least while they were at it, they should have removed the Hamas graffiti too.

Before I even got to it, I said exactly what you did. Nuttin' crazy 'bout dat.

Surely you can't stop at just one conspiracy theory?! I mean, it could have just as plausibly been someone- anyone- who wanted to fuel exactly this sort of conspiracy theory against the Left/The Shabak/The Whoever. People are just stupid and don't think out the consequences of their actions.

but there are already plenty known examples of leftist and shabbak incitements in an attempt to frame the right, so it is not so far-fetched.

Rabin in the SS Uniform.
Eyal swearing in ceremony.
Kahalani brothers pushed to commit murder by their handler who loaded their gun with blanks.

...and the oil on the highway during the disengagement (but they are still trying to cover that one up even though the entire country already knows the whole story about who really got arrested and why they were quietly released and who they then blamed instead).

...and those Doberman dogs someone 'snuck into' Ohana's yard - maybe someone should check the records of 'Kalbiyat Oketz' [the Southern Command of the Israel Police's dog kennel]...

...and that cop car [and another car] that got burned even though the cop [who was the head of the 'aKtion' at Amona] was under special surveillance from way before...

I was about to mention that one, but ya beat me to it [the car torching].

But say, who had to gain [from the grafitti]? The people who pray in the mosque, who got a free wash from Tzahal!!! :))

Just reading about all these things makes me so angry. It's hard to imagine when reading the torah that yishmael was this terrible. I guess he was. I want to call them animals but if I do I am giving them an excuse. They are disgusting humans

I hope I get to sleep this shabbat.

I am apparently one of the few people in the country who does not know about who really got arrested in the alleged oil-on-the-highway incident, nor why they were released.

Not only do I not know who was responsible in that story; I never heard of the story to begin with.

Back to the story at hand, though, I don't agree with most of the comments concerning the conspiracy. I think it was just another crazy Kahane guy who had no(nor does he now have) idea that his actions would bring about only negative reaction and much unfriendly media coverage.

These maniacs are the minority even in Yesh(a) and they don't have very much influence though the left would have us believe these are the typical "settlers." It's too bad that we have idiots of our own to go along with the crazy bastards on the other side.

Muslim Rave Party Sensation
(Is this what will replace Hip-Hop ?)

Eitan: It makes no sense in the slightest that a "crazy Kahane guy" would do this in 1. Nabai Alias, 2. This area of the Shomron.

There are MANY other locations which would make alot more sense in terms of:

1. Would rile up the Arabs more.
2. Less dangerous to graffiti a mosque
3. More convenient to get to.

Overall, 99 out of 100 people surveyed think this story is either the work of:

1. Kadima
2. The Shabak
3. The Arabs themselves

(in no particular order)

I saw your blog and i think it's cool, you showld take a look at this website.

Yishma`eil was not so terrible. Don't blame our unchosen uncle for the actions of some of his crazed pseudonymous descendents.