So many things to post about, so little time. I will still blog last Thursday night's escapade to deep in the heart of the Shomron, and Friday morning's continental breakfast off the beaten path, but first I must tell you about Israel's best.

Though some of you will say this guy is a "frier" (and his parents may even agree), you still need to read this story.

In 2002, IDF units operating in the Shomron received a "high priority warning" that a Palestinian suicide car bomb was about to leave the Arab village of Nazlet Zait, on its way to one of Israel's coastal cities; probably Netanya. An IDF officer jumped into his jeep and drove like the devil to the village, with a single purpose in his head; "stop the terrorist car."

Entering the village, his jeep was immediately pelted by rocks, iron bars, and everything a quickly formed Arab mob could find to prevent the jeep from searching for the suicide car and bomber. Exasperated, the officer fired into the air -- far and away towards a building where more rocks were being thrown from. The shooting mildly displaced some of the mob, and they raced around the village attempting to find the car, but to no avail.

Later that day, a dead teenager was brought to an IDF checkpoint; an IDF doctor at the scene pronounced him dead. The teenager's parents claimed he was shot by an IDF soldier.

The Israeli Left, Peace Now, Gush Shalom and friends, took up the cause and hounded the IDF for months, demanding that the IDF officer be brought to "justice." Unable to withstand the pressure, the officer was tried and found guilty. He was sent to demoted and sent to military prison. The officer and the IDF just lost a civil case as well and were ordered to pay 500,000 NIS compensation to the parents of the teenager. (Apparently, the IDF will foot the bill)

The officer's sister wrote a letter about it all here.

A few important points to ponder you won't read about in the news.

1. Total lack of habeas corpus; at no point in time was a post-mortum examination done to determine that the teenager had even been killed by a bullet, let alone from the IDF officer. There is no ballistic evidence at all.

2. Although officially demoted by the IDF and served jail time, the officer is still in the IDF (and apparently, is still highly wanted there as well).

3. Prior to this operation, the officer had received the "outstanding officer" award by the IDF chief of staff.

4. The Arab judge who sentenced the IDF officer to pay 500,000 NIS compensation, glibly stated "although the unit was hard pressed to intercept the car, the officer could have circumvented the stone-throwing crowd without opening fire."

I sincerely hope this judge finds himself and family in the same situation (sans gun) in the near future.

So what's my angle to this story?

Why the heck does this IDF soldier STAY in the IDF? Not only does he get stabbed in the back by the IDF but again by the State...and yet he remains in the IDF and continues to serve.

Scratch your head and ponder today's headlines...almost half of all IDF combat officers today are religious. 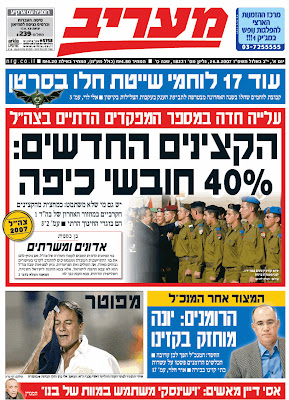 I may not agree with his conclusion, but it's something to ponder. Sort of like an Israeli Jack Bauer; the country sends him on a mission, and then turns him into a traitor and criminal.

I think the title of your post says it all: this officer is Israel's Best.

It was actually a Druze judge and he largely relied on the military court ruling which found the officer guilty of causing death through negligence, among other things. So the blame lies largely with army judge, probably some leftist miluimnik.

My former roomate is in course mak'm and will have 2 bars in a few monthes.

So Jameel- the real question is, how does/can the religious community's success and influence in the army translate into influence on a national-political level?

A side point: though habeas corpus does literally mean "produce the body," it is used only in the sense of "produce the [unjustly/illegally] imprisoned person." What you mean to say is that there was no evidence whatsoever. The criminal case was certainly not proven beyond a reasonable doubt (or whatever the Israeli military standard is) and the in the civil case there was no proof of causation.

i dont get why if so many IDF soldiers are religious, that they dont all "strike" so to speak? if they all refuse to serve together the government will be forced to accommodate them or risk not having an army. At the same time it would be nearly impossible to throw them all in jail.
-moses rabbeinu

this post is a perfect example of how Feiglin supporters are a cult of the personality. You worship Feiglin without internalzing anything he says.
Getting more religious officers in the army is like walking up the down escalator. The regime uses the army to its own ends. the army is now a political tool in the hands of the regime. but compartmentalizing it all by saying they "are serving am yisrael and not the corrupt regime" is basically fascism and turns the state into an avoda zara.
it's time for the national religious community to flip it's record. "taking over the army" is a dead-end. it will just produce more Yair Naveh's and Elazar Stern's and more morally warped religious Jews like the ones who listened to certain rabbis and participated in the Gush Katif pogroms. more good would have been done had more religious lawyers troubled themselves to go out vote for Ilan Bombach to be elected to the head of the bar association (and thus a seat on the judges selection committee) than having another 300 religious officers. but the religious lawyers stayed home, the arabs voted and radical leftist is now in the position. Feiglin fell on easy prey in the national religious community. It would seem that even educated intelligent people seem to have a need to belong to a cult.