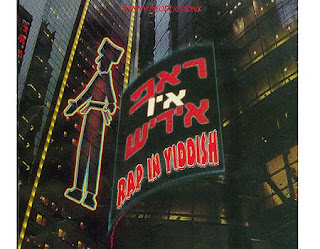 After R' Gil discusses the use of secular tunes in Kedusha, it was only a matter of minutes before YNET (in Hebrew) reported about the "Rap in Yiddish" music CD which has yet to make its way to Israel. Recorded in America by 2 chareidi musicians, the album consists of tunes from Madonna, 50 cents, and others -- converted into Jewish themes...and sung...in Yiddish. Chareidi newspapers report that the CD isn't in Israel yet due to rabbinic pressure, and is only available in the US.

Mordechai Ben David did the same with the hit song, "Yidden, Yidden" -- which is based on the German Eurovision song, Ghengis Khan.

This one is much better because of the intro...which isn't "news" to most people who remember when the song came out.

Jameel: check out the rap Zioni over at my domain. Well, hell, I'll tell how it be: I'm one crazy M.C. and I tell it like it is: us Jews here in Israel feelin the heat but we'll never bow down to defeat and on and on we go, rappin to a new flow...

I think immediately preceding "Genghis Khan" was the Israeli entry, which won that year. Perhaps that's how MBD first heard it.

OMG. I had no idea MBD stole this tune from what appears to be the German version of the Village People crossed with Fleetwood Mac... This is too hilarious.