Apparently one must agree with the Obama Regime in order to get a 501(c)(3) tax exempt status. At least according to someone in the IRS.

Z STREET, a pro-Israel non-profit corporation, filed a lawsuit in federal court today charging that the IRS violated the organization’s First Amendment rights. The suit was filed after Z STREET was told by an IRS official that its application for tax-exempt status has been delayed because an IRS policy requires consideration of whether a group’s views on Israel differ from those of the current Administration.

“Not only is it patently un-American but it is also a clear violation of the First Amendment for a government agency to penalize an organization because of its political position on Israel or anything else,” said Z STREET president Lori Lowenthal Marcus, a former First Amendment lawyer. “This situation is the same as if the government denied a driver’s license to people because they were Republicans or Democrats. It goes against everything for which our country stands.”

Z STREET filed for tax-exempt status in January of this year and, despite having met all of the requirements for grant of this status, the application has been stalled.

An IRS agent told Z STREET’s lawyers that the application was delayed because of a Special Israel Policy that requires greater scrutiny of organizations which have to do with Israel, in part to determine whether they espouse positions on Israel contrary to those of the current Administration.

Z STREET is a Zionist organization that proudly supports Israel’s right to refuse to negotiate with, make concessions to, or appease terrorists. Z STREET’s positions on Israel and, in particular, on the Middle East “peace process” differ significantly from those espoused by the Obama administration.

If Z STREET had tax-exempt status, its donors would be able to deduct contributions from their taxable income. The IRS's refusal to grant tax-exempt status to Z STREET has inhibited the organization‘s fundraising efforts, and therefore impeded its ability to speak and to educate the public regarding the issues that are the focus and purpose of Z STREET.

The lawsuit, Z STREET v. Shulman, Commissioner of Internal Revenue, was filed today in the United States District Court for the Eastern District of Pennsylvania.

J-Street on the other hand had no problem getting it. 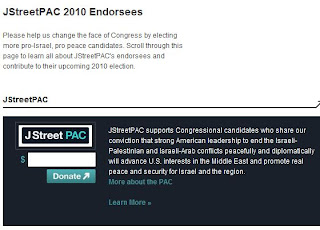 That's why J-Street created three "separate" legal entities in the same J-Street family (and office), so they can get around that little problem by claiming each division to be legally independent.

J Street is itself a 501(c)(4) non-profit corporation, and a registered lobbying organization, which uses online organizing, advocacy, and education to achieve its goals on Capitol Hill and with the Executive Branch.

JStreetPAC is a legally independent political action committee and is the first PAC specifically established to endorse and raise money for candidates for federal office who support active American leadership to bring peace and security to Israel and the Middle East. In its first year, JStreetPAC raised nearly $600,000 for its 42 endorsed candidates for U.S. Congress, 34 of whom won their races.

J Street Education Fund, Inc. is a 501(c)(3) charitable organization. It aims to educate targeted communities about the need for a two-state solution to the Israeli-Palestinian conflict, raise the visibility of a mainstream pro-Israel, pro-peace presence within the American Jewish community, and promote open, dynamic and spirited conversation about how to best advance the interests and future of a democratic, Jewish Israel. J Street Local, J Street’s national field program and J Street U, J Street’s on campus movement are programs of the J Street Education Fund.

Do you think they're doing a good job keeping their departments separate on anything but paper? I'm sure they're very smart about keeping things looking separate on paper, and that's probably where it counts the most.

(But if you personally think that J-Street is in violation of their tax exempt status, you can certainly contact IRS Customer Service operations concerning tax-exempt organizations at (877) 829-5500 (toll-free number). The call center is open 8:00am to 9:30pm Eastern Time.)

But we're talking Z Street in this post, not J Street.

I simply find it strange that non-profits dealing specifically with Israel undergo extra scrutiny, and can be denied tax exempt status by having a policy that disagrees with the current Regimes.


Visiting Israel?
Learn to Shoot at Caliber-3
with top Israeli Anti-Terror Experts!
Wherever I am, my blog turns towards Eretz Yisrael טובה הארץ מאד מאד
Posted by JoeSettler

No doubt delay is the result of the NYTimes article alleging RW Israeli charities occasionally violate US law. However, the issue here is not solely free speech but a tax exemption, which in essence is a government subsidy.

Actually, from a private conversation with someone at Z-Street, I was told, "The review of our file began long before the NYT story about funding anything over the "Green Line" came out."

"It sounds almost unconstitutional." Only sounds that way?! Oh man is it going to be a long two years until we can get the present "regime" out of the White House. People with personal agendas of the magnitude and disruptive nature of our present president ought never to be put into positions of authority or power, and we are all going to pay for the mistake made by voters in the last election.

Re the tax exemption as government subsidy, that "fact" does not abrogate Constitutional rights of free speech.

There is bias here in the application of the law, buddy.
It may (or may not) be a government subsidy, but the government can't decide it disagrees with what someone says and hence the law will be selectively applied.
I'm sure I've heard the liberals all screaming that with the Ground Zero Mosque.

Wow - if this hussein obama is kept in office much longer, the screws tightening all around are going to become fiercely annoying.

In all fairness, is very difficult to obtain a 501(c)3. I am the voice of experience. Z Street's lawyers would be well-advised to persevere and respond to every unreasonable and aggravating demand of the IRS INDIVIDUAL handling the case. They treat everybody like dreck, but the determined succeed as I did.

I was imagining this originated in a policy that scrutinized org's lest they support terrorism. But as many good laws, has since taken a wrong turn.

if the government doesn't want to do something, it won't do it. And if the American government supports Israel only verbally as they really do in fact, then it's absolutely clear why there're so many "obstacles" to give to the organization what they have been struggling for.

Compare that with AIPAC:

AIPAC is registered as a domestic lobby and supported financially by private donations. The organization receives no financial assistance from Israel, from any national organization or any foreign group. AIPAC is not a political action committee. It does not rate, endorse or contribute to candidates. Because it is a lobby, contributions to AIPAC are not tax deductible.