The "outrage" over an IDF soldier's behaviour

Outrage Around the World:

Eden, the ex-soldier from Ashdod who posted photos from her time in the IDF posing next to cuffed Palestinian detainees on her Facebook page is shocked by the backlash the incident prompted. "I received death threats from all over the world on Facebook," she told Ynet. "I'm sorry if anyone got offended, I actually took care of the detainees. The IDF has let me down profoundly. I wish I never served in such an army."

The photos were taken in the Gaza Strip where Eden was stationed during her IDF service. They caused a stir around the world and were reported on by CNN, Sky News as well as British newspapers such as the Guardian. "It's unbelievable that so many people are talking about me," she said. "I find it astounding that there are so many people who want peace and I'm the one ruining it for them. I got loads of death threats, I'm not scared, I know I didn't do anything wrong." (ynet) 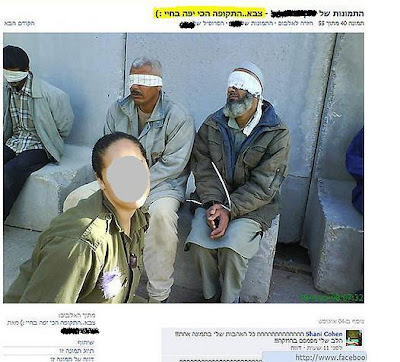 Eden shouldn't have posted her photos from her IDF tour of service on facebook -- that was rather stupid. To her credit, she wasn't smiling in the photos.

Of course, the real hypocrisy is that there was zero outrage in Israel when the following IDF soldiers and Israeli policemen took photos of themselves smiling, grinning and laughing, as they evicted thousands of Jews from their homes in Gaza, destroyed their homes, and dug up the graves of buried Israelis (smiling in front of the coffins).

All the following photos are from the Gush Katif memorial web-page which documented the expulsion. 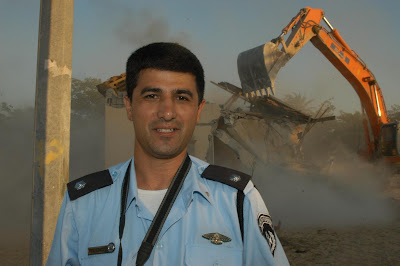 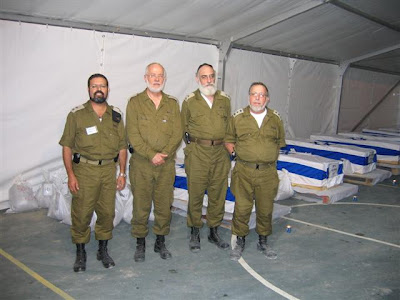 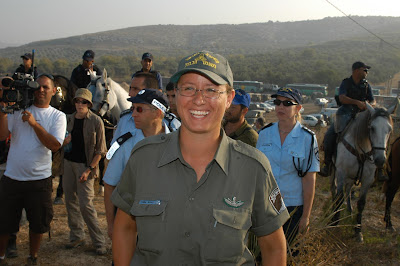 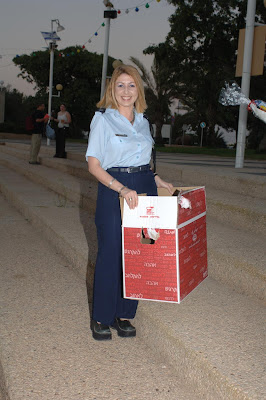 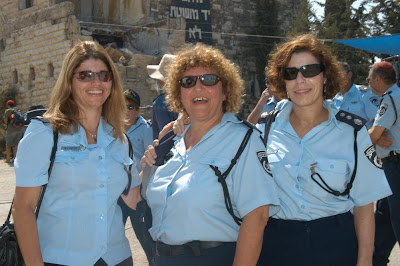 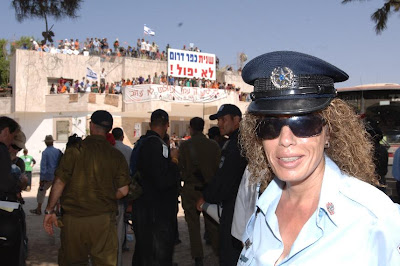 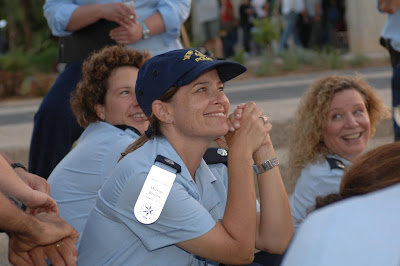 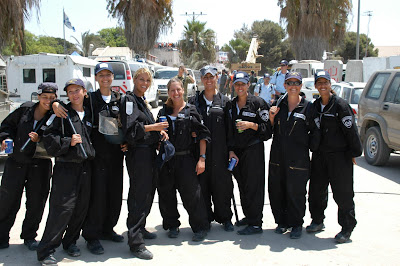 Israeli policemen pose in a home to be destroyed. 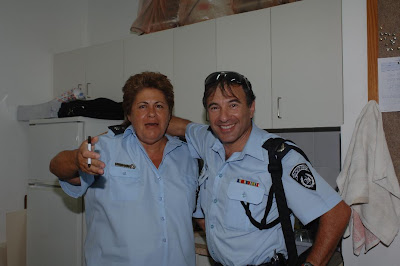 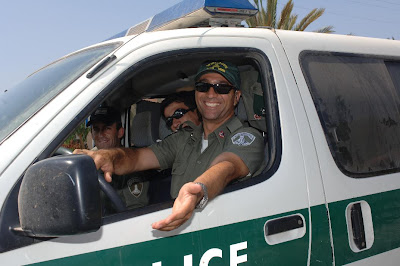 The IDF Spokesman's Unit issued a statement in response to the incident describing the ex-soldier's behavior as shameful. Eden claimed that she was told by the IDF she will not be called for reserve duty and will be stripped of her ranks. "I'm very disappointed with the IDF, the army is ungrateful. I risked my life, got injured, I was a model soldier, and now I wish I never served in this army."

She explained the IDF's response by saying that "the army is making the soldiers look bad and the country look great so that Obama won't get pissed off. As far as I'm concerned we're not even an independent state, people are afraid of just pictures. I'm sorry this is the way my country is."

The IDF spokesman's unit didn't say the photos above were shameful...so it's perfectly understandable why Eden thought it was ok posting her photos to facebook.

Here's some more video footage of the over-joyed soldiers and policemen who were responsible for the expulsion from Gush Katif.

The infamous sock dance of the grave expulsion unit.

The infamous and vulgar Police Officer explaining how to expell and arrest Jews.

And here's the heart-wrenching video of the residents prior to their eviction.

Actually Jamil, both sets of photos are shameful.

Sorry, Jameel.
I think the IDF was right to take action here.

What action was taken by the IDF against all the soldiers and policemen who took smiling photos against the backdrop of the Expulsion in Gush Katif?

Let me know how those people were punished; I must have missed it.

I have no idea - presumably nothing - but two wrongs don't make a right Lurker. Those photographs were not excusable.

To be fair, most of the smiles in those photos look to be of the sort we make automatically when we're asked to pose for a shot. But not all.

Also to be fair, those were news photos, not posted on Facebook.

I would, however, love to know what the hell is going on in that "sock dance" video. I know Israelis like to sing, but that looks a bit freaky.

I didn't justify the first photos either, I just explained that its hypocrisy to blame the first soldier, while hundreds smiled when they destroyed Gush Katif.

The IDF takes action with Eden, but has absolutely no comment on the soldiers who smile in front of coffins they have just dug up? Or those smiling as bulldozers destroy thousands of Jewish homes?

Anonymous @ 3:25 AM: ...two wrongs don't make a right Lurker. Those photographs were not excusable.

Where, exactly, did I, or Jameel, say that "two wrongs make a right", or that the photographs were "excusable"? On the contrary, Jameel said that "Eden shouldn't have posted her photos from her IDF tour of service on facebook".

The point, which you seem to have completely missed, is that all those who express supposed "outrage" over Eden's photos, but were silent (or were even part of) the photos of all the happy, smiling soldiers at the Expulsion and destruction in Gush Katif, are complete and utter hypocrites.

I am sickened by the support you have shown for the destruction of Gush Katif by publishing these photos. For shame.

Your silence is both deafening and defining.

You can not compare the pictures "someone took of themselves" in what is an inappropriate place and time and the pictures that you posted of the police and soldiers - these were news photos taken by official photographers not thrill memorabilia pictures taken and posted on a social network. You are posting these pictures completely out of context not a one of the people in those pictures was smiling at what was going on around them, it was hard and painful for all involved, even grieving ppl can smile.

The smiles on their faces in GK are huge! They were posing for the pictures.

They're posing and smiling inside someone's house they just kicked the owners out of and are about to destroy. That's a memorabilia photo if I ever saw one.

No context on GK photos?!

That's exactly what the soldier said about the lack of context of the photos of her.

Glad we cleared that up.

Its simple... the Israeli Left believes in showing compassion towards Israel's enemies but not towards Jews.

Why the double standard?

The smiles are huge because they're artificial, "Say cheese" smiles. Come on.