Much to the Obama administration and State Department's dismay, the US Congress Foreign Relations Committee is blocking $100 million of US military aid and training for the LAF . This follows Lebanon's attack on Israel, possibly using US weapons in the attack, and most likely using snipers who received US training.

Lebanese (LAF) soldier with US weaponry 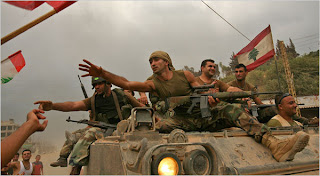 This is not the first time that the LAF and Lebanese government subverted US military aid to attack Israel and US security interests.

Israel had set up a spy network in Lebanon to specifically spy on Hezbollah.

The US provided the LAF and Lebanese government with counter-surveillance equipment specifically to use against Hezbollah, and Lebanon instead only used it to locate and dismantle Israel's security espionage network against Hezbollah - also damaging US intelligence efforts against Iran and Hezbollah in Lebanon.

The Muqata is proud to have been the first to bring the matter to the attention of the general public of the possible misuse of US aid, equipment and training specifically during last week's attack on Israeli forces by the Lebanese government. Thanks to our investigative efforts we put this snowball in motion.

But this is not the first time that US security funding, equipment and training have been turned against Israel and US interests.

Palestinian Authority "policemen" have been involved in numerous terror attacks against Jews and US citizens. It is only a matter of time before US General Dayton's Palestinian militia is used full force against Israel. In fact, Dayton has himself warned that this is likely to happen by 2011 if no Palestinian state is created.

Dayton has been thrown out from the PA twice already. The first time was from Gaza, the second was a few months ago after Dayton had a disagreement with the PA leadership.

Israel (post on this subject to go up soon) has recently kicked out Dayton's PA "police" forces from some Arab villages after numerous attacks on Israelis coming from those villages that are under PA security management.

The US policy of funding easily subverted foreign military forces in unstable Islamic countries and governments in the hope of propping up weak leadership is not a sustainable policy. It is not good for US interests in the long-term.

Back in 2008, the US was praising Lebanese military aid (while Israel expressed concern), and the NYTimes even provided some relevant quotes supporting US aid to Lebanon's army.

Now, however, American officials say they have faith in the independence and professionalism of the army, which has become thoroughly integrated to include all of Lebanon’s many religious and ethnic factions, and has avoided interfering in politics. American-driven audits have shown that almost nothing given to the army has ended up in Hezbollah’s hands.

“They have demonstrated year after year after year that when we give them equipment, they take responsibility for it,” said Mark T. Kimmitt, assistant secretary of state for political and military affairs.

Israel made the same mistake by selling advanced arms to Turkey and supporting the PA, and now this policy is coming back to bite Israel.

When will the West learn this lesson?

For further reference:
Dayton I

and for the third strike out:

Dayton has been Training tomorrow's terrorists in the Palestinian territories for years.

well done, boys. when are you going to post some stupid stuff i can make fun of? being nice and complimentary all the time is tiring.

Department confirms that this bad Lebanon policy is the one they think is best.