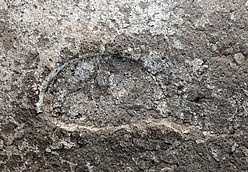 Lod, the city once associated with Israel's primary airport (though now luggage tags say "TLV" - Tel-Aviv on it)...is back in the limelight.

While they may not have been the markings of a pair of Naot sandals, Israel Antiquities Authority conservators discovered footprints over 1,700 years old in early October under the Lod mosaic and at least one print resembling a modern sandal.

"This is also what happened with the Lod mosaic: beneath a piece on which vine leaves are depicted, we discovered that the mosaic's builders incised lines that indicate where the tesserae should be set, and afterwards, while cleaning the layer, we found the imprints of feet and sandals: sizes 34, 37, 42 and 44."

He said that similarities of the footprints of the sandals lie in the fact that sandals today are based on the footwear of the past.

"They're simple," Neguer said. "If it's comfortable, why change it."(JPost)

It seems ancient footprints all popping up all over the Israel. First there was Prof Adam Zartal's find...and now the under-the-mosaic footprints. 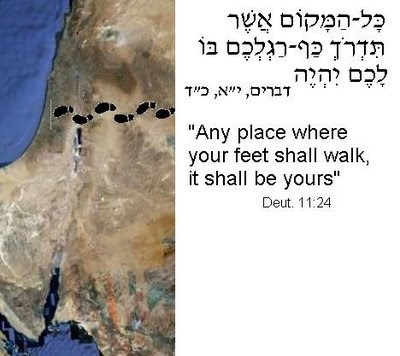 Now, if they could only find a pair of Crocs...

So they cut corners and didn't properly smooth the bedding before laying down the mosaic? Typical Israeli workmen! Grrr!