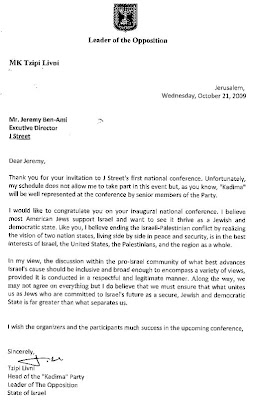 Former US ambassador to Israel Martin Indyk stated that when Tzipi Livni was foreign minister she warned the Palestinian Authority not to accept a "peace" deal offered by then-prime minister Ehud Olmert.

"In a discussion at President Shimon Peres's 'Facing Tomorrow' Presidential Conference 2009 in Jerusalem, Indyk said that the Palestinians should not be blamed for rejecting Olmert's peace offer, because of his unstable political situation at the time, Army Radio reported.

When asked by Channel 2 reporter Udi Segal, who was hosting the panel, whether the Palestinians missed an opportunity when they rejected Olmert's proposal, Indyk reportedly replied that "the prime minister was about to have an indictment filed against him and the foreign minister herself specifically told both the Americans and the Palestinians: Don't you dare sign the agreement."(JPOST)

5. She didn't want them to get involved with another possible scandal indictment with Ehud Olmert the crook.

4. Was worried that signing might still allow Magen David Adom ambulances to provide emergency services to Palestinians in East Jerusalem.

3. Thought Ariel Sharon was about to wake up from his coma (others seem to think so)

2. Was afraid that Abbas would be a guest of honor at a JStreet conference before her. [Thanks YMedad!]

1. She wanted to win the election and give even MORE to the Palestinians than Ehud Olmert.

I never understood the claims against Livni that she wanted to give away more. It is one thing to be flexible in negotiations, and weak, and give in to demands. But if Olmert was on the cusp of an agreement, and the PA was willing, why would Livni want to give them more than what they were already willing to accept? It doesn't make any sense. You and I might not like Livni, but nobody claims she works for the Neturei Karta...

OK, if it doesn't make sense - can you please provide some reasons why she would "warn" the Palestinians not to sign with Olmert?!

the other four you listed are good enough for me.

though I also don't understand her not wanting them to get involved in a scandal as being a reason. a) why would their signing a peace deal get them involved in Olmerts private scandal? b) why would she be so worried about them?

Who would have thought that Olmert's travel agents would be involved in his private scandals as well.

I don't believe that. As I said, I don't like Livni and also think she is an opportunist along with not having any real plan when she was among those leading negotiations. But I don't believe she was the PA advocate rather than an advocate of Israel. I think she is not worthy of being PM, but that does not mean she is looking out more for the interests of the PA than those of Israel (as she sees them at any given moment)

Her #1 interest is looking out for herself...

J-StreetWALKER?
'street walker'? This sounds off.
Are you sure of this slur? Maybe this is a bit too smeary for a woman?

Its a good thing nothing came of it. Every one in Israel today is asking: "Tzipi who?" She was a very undistinguished Foreign Minister for sure and she was no Golda Meir in office.