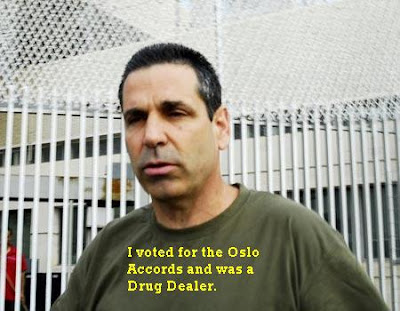 What a shame this guy was let of out prison.

"Former minister Gonen Segev was released from jail on Monday after a committee knocked off 19 months from his five-year sentence for drugs smuggling offenses.

Segev started his sentence in June 2004 after he was convicted of attempting to smuggle 32,000 Ecstasy pills into Israel.

Segev was also convicted of forging a diplomatic passport and using it on two occasions." (YNET)

Segev was part of the Oppostion to Rabin's government in as a member of the Tzomet party. He split off and formed a new party so he could become Minister of Energy and Infrastructure, and cast the deciding ONE vote that enabled the Oslo accords to take place with an overwhelming Knesset majority of one.
In a related story today...more political slime.

The police recommended on Monday that two senior tax officials and a former top aide to Prime Minister Ehud Olmert be indicted on charges of bribery, fraud and breach of public trust.

Hopefully, Olmert and many other corrupt Kadima and Labor politicians will find their way to prison soon enough.

But I'm not holding my breath.

I think you should change the caption on Gonen Segev's T-shirt to "I voted for Oslo, dealt in drug smuggling and forged a diplomatic passport... and all I got was this lousy T-Shirt"