A Palestinian family, their belongings crammed into a taxi, wait to be allowed through the Rafah border crossing to start a new life in Egypt 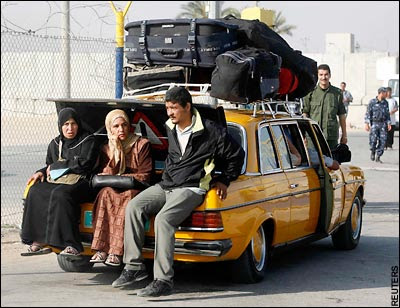 European Union monitors at the Rafah border crossing from the Gaza Strip to Egypt any that more than 14,000 Palestinians have fled Gaza since Israel withdrew soldiers and settlers in 2005 and the rise to power of the Islamist Hamas five months later. In the past year alone, the average number of people leaving Gaza per day has doubled from 15 to 30. (Daily Telegraph)

Seems like the UN should want Israel to rebuild Gush Katif, so that more Palestinians will flock to Gaza instead of leaving.

Rival gunmen exchanged fire at two Gaza hospitals, and Cabinet ministers fled their weekly meeting after the government headquarters was hit in crossfire Monday, in the latest round in an increasingly brutal power struggle between Hamas and Fatah.

After sundown, gunmen, apparently from Hamas, laid siege to the house of Jamal Abu al-Jediyan, the senior Fatah official in northern Gaza, then dragged him outside and killed him, security officials said. Medics said he was hit by 45 bullets. (YNET)

I think it's time to seriously rethink your next donation to Beit Hanoun Hospital, and give to Shaarei Tzedek instead.

Email ThisBlogThis!Share to TwitterShare to FacebookShare to Pinterest
Labels: Palestinian Self Disengagement

Although 14000 is probably much less than the natural growth in population over that period.

Wow! Look at that pink car! Wouldn't mind one of those.

READ THE FOLLOWING PASSAGES FROM THE BIBLE AS IT HAS IMPLICATIONS ON THE WAR AGAINST TERROR/ISLAM and the claim of Israel that god gave them the land. If the child is an infant than the Judeo-Christian version becomes null and void and we are wasting our time and resources i.e. we could save trillions of dollars and create a more peaceful world rather than fighting against Islam the religion of Abraham, Moses, Jesus and Muhammad (peace be upon them all).

The COVENANT with Abraham and his DESCENDANTS is central to JUDAISM/CHRISTIANITY/ISLAM.

Please note this is not a competition between faiths but an attempt to decipher fact from fiction.

Early the next morning Abraham gave Hagar an animal skin full of water and some bread. Then he put the boy on her shoulder and sent them away.

GENESIS 16:16
And Hagar bore Abram a son; and Abram called the name of his son, whom Hagar bore, Ish’mael. Abram was eighty-six years old when Hagar bore Ish’mael to Abram.

GENESIS 21:5
Abraham was a hundred years old when his son Isaac was born to him.

At Genesis 22 Abraham had only 2 sons others came later. The Quran mentions that it was Ishmael that was sacrificed hence the reference in genesis 22:2 your only son can only mean someone has substituted Ishmael names for Isaac!!

THAT WOULD MAKE ISHMAEL 17 YEARS OLD IN GENESIS 21:14-21
BUT IT IS A DESCRIPTION OF AN INFANT.

Carefully read several times the above passage and then tell me the mental picture you get between the mother child interactions what is the age of the child. If the mental picture is that of a 17 year old child being carried on the shoulder of his mother, being physically placed in the bush, crying like a baby, mother having to give him water to drink, than the Islamic viewpoint is null and void. Why is there no verbal communications between mother and (17 YEAR OLD) child?


The age of Ishmael at this stage is crucial to the Abrahamic faiths. If he is 17 than the JUDEO/CHRISTIAN point of view about the Abrahamic covenant is correct. This has devastating theological consequences of unimaginable proportions.

This makes the conflict between Ishmael and Isaac and there descendants a work of fiction. I would strongly suggest it is clear cut case of racial discrimination and nothing to do with god almighty. The scribes have deliberately tried to make Isaac the only son and legitimate heir to the throne of Abraham??

Please can you rationally explain this anomaly?

I have asked many persons including my nephews and nieces - unbiased minds with no religious backgrounds but with reasonable command of the English language about this passage and they all agree that the child in the passage is an infant.
AS THE DESCRIPTION OF ISHMAEL IN GENESIS 21:14-21 IS THAT OF AN INFANT IT CAN BE ASSUMED SOMEONE HAS MOVED THIS PASSAGE FROM AN EARLIER PART OF SCRIPTURE!!! AND HAVE GOT THERE KNICKERS IN A TWIST.

For background info on the future religion of mankind see the following websites:

(MUHAMMAD IN THE BIBLE)


101. So We gave him the good news of a boy ready to suffer and forbear.


102. Then, when (the son) reached (the age of) (serious) work with him, he said: "O my son! I see in vision that I offer thee in sacrifice: Now see what is thy view!" (The son) said: "O my father! Do as thou art commanded: thou will find me, if Allah so wills one practising Patience and Constancy!"

103. So when they had both submitted their wills (to Allah., and he had laid him prostrate on his forehead (for sacrifice),

105. "Thou hast already fulfilled the vision!" - thus indeed do We reward those who do right.

107. And We ransomed him with a momentous sacrifice:

108. And We left (this blessing) for him among generations (to come) in later times:

110. Thus indeed do We reward those who do right.

111. For he was one of our believing Servants.

113. We blessed him and Isaac: but of their progeny are (some) that do right, and (some) that obviously do wrong, to their own souls.

114. Again (of old) We bestowed Our favour on Moses and Aaron,

115. And We delivered them and their people from (their) Great Calamity;

116. And We helped them, so they overcame (their troubles);

117. And We gave them the Book which helps to make things clear;

118. And We guided them to the Straight Way.

119. And We left (this blessing) for them among generations (to come) in later times:

120. "Peace and salutation to Moses and Aaron!"

121. Thus indeed do We reward those who do right.

122. For they were two of our believing Servants.

ISHMAEL IS THE FIRST BORN AND GOOD NEWS OF ISSAC DOES NOT APPEAR UNTIL AFTER THE SACRIFICE?????
Therefore the claim that god gave the land to Israel is destroyed without the need of any WMD’s.
HADITH

The first lady to use a girdle was the mother of Ishmael. She used a girdle so that she might hide her tracks from Sarah. Abraham brought her and her son Ishmael while she was suckling him, to a place near the Ka'ba under a tree on the spot of Zam-zam, at the highest place in the mosque. During those days there was nobody in Mecca, nor was there any water So he made them sit over there and placed near them a leather bag containing some dates, and a small water-skin containing some water, and set out homeward. Ishmael's mother followed him saying, "O Abraham! Where are you going, leaving us in this valley where there is no person whose company we may enjoy, nor is there anything (to enjoy)?" She repeated that to him many times, but he did not look back at her Then she asked him, "Has Allah ordered you to do so?" He said, "Yes." She said, "Then He will not neglect us," and returned while Abraham proceeded onwards, and on reaching the Thaniya where they could not see him, he faced the Ka'ba, and raising both hands, invoked Allah saying the following prayers:
'O our Lord! I have made some of my offspring dwell in a valley without cultivation, by Your Sacred House (Kaba at Mecca) in order, O our Lord, that they may offer prayer perfectly. So fill some hearts among men with love towards them, and (O Allah) provide them with fruits, so that they may give thanks.' (14.37) Ishmael's mother went on suckling Ishmael and drinking from the water (she had).
When the water in the water-skin had all been used up, she became thirsty and her child also became thirsty. She started looking at him (i.e. Ishmael) tossing in agony; She left him, for she could not endure looking at him, and found that the mountain of Safa was the nearest mountain to her on that land. She stood on it and started looking at the valley keenly so that she might see somebody, but she could not see anybody. Then she descended from Safa and when she reached the valley, she tucked up her robe and ran in the valley like a person in distress and trouble, till she crossed the valley and reached the Marwa mountain where she stood and started looking, expecting to see somebody, but she could not see anybody. She repeated that (running between Safa and Marwa) seven times."
The Prophet said, "This is the source of the tradition of the walking of people between them (i.e. Safa and Marwa). When she reached the Marwa (for the last time) she heard a voice and she asked herself to be quiet and listened attentively. She heard the voice again and said, 'O, (whoever you may be)! You have made me hear your voice; have you got something to help me?" And behold! She saw an angel at the place of Zam-zam, digging the earth with his heel (or his wing), till water flowed from that place. She started to make something like a basin around it, using her hand in this way, and started filling her water-skin with water with her hands, and the water was flowing out after she had scooped some of it."
The Prophet added, "May Allah bestow Mercy on Ishmael's mother! Had she let the Zam-zam (flow without trying to control it) (or had she not scooped from that water) (to fill her water-skin), Zam-zam would have been a stream flowing on the surface of the earth." The Prophet further added, "Then she drank (water) and suckled her child. The angel said to her, 'Don't be afraid of being neglected, for this is the House of Allah which will be built by this boy and his father, and Allah never neglects His people.' The House (i.e. Kaba) at that time was on a high place resembling a hillock, and when torrents came, they flowed to its right and left. She lived in that way till some people from the tribe of Jurhum or a family from Jurhum passed by her and her child, as they (i.e. the Jurhum people) were coming through the way of Kada'. They landed in the lower part of Mecca where they saw a bird that had the habit of flying around water and not leaving it. They said, 'This bird must be flying around water, though we know that there is no water in this valley.' They sent one or two messengers who discovered the source of water, and returned to inform them of the water. So, they all came (towards the water)." The Prophet added, "Ishmael's mother was sitting near the water. They asked her, 'Do you allow us to stay with you?" She replied, 'Yes, but you will have no right to possess the water.' They agreed to that." The Prophet further said, "Ishmael's mother was pleased with the whole situation as she used to love to enjoy the company of the people. So, they settled there, and later on they sent for their families who came and settled with them so that some families became permanent residents there. The child (i.e. Ishmael) grew up and learnt Arabic from them and (his virtues) caused them to love and admire him as he grew up, and when he reached the age of puberty they made him marry a woman from amongst them.