Hamas gives Fatah a taste of their own medication

Exclusive pictures from AL-Aksa TV of Fatah Terrorists in their underwear being escorted from their positions as they surrender to Hamas Terrorists... 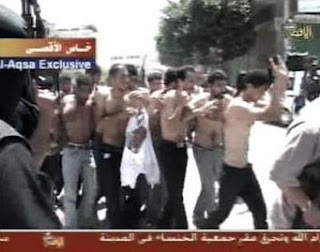 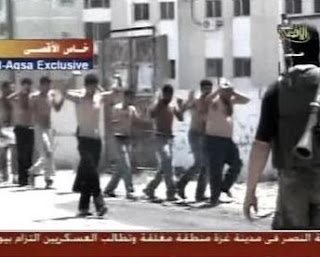 The world is horrified (well, not really too much) as Hamas declares war on rival Fatah terrorists; shootings, RPGs, attacking hospitals, throwing people from buildings, are all the norm these days in Gaza.

Some even feel sorry for Fatah, thinking they are "moderate" terrorist who can be reasoned with. (DryBones is featured on YNET and on the DryBones Blog)

Both the Hamas and Fatah are terrorist organizations. Both proudly count among their membership those who have murdered, wounded and maimed Jews through shootings, suicide bombings, bus attacks, airplane attacks, car bombs, donkey bombs, bicycle bombs, teenager suicide bombers, women suicide bombers, Qassam rockets, Katyushas, and every means of destruction available to their disposal.

The are organizations based on a culture of death.

Just like the 7 year war between Iran and Iraq, let's just sit on the sidelines...

help me! help me jameel!

no. no. don't come any closer!

People talking of disunity and civil war miss the point: Hamas now has consolidated control over Gaza (and there is a possibility Fatah will now try to do the same in the West Bank [or Hamas will]).

What does this mean in the long term? A Hamas that tries to work with Israel so it can get social services or one that can now better organize attacks. Or both.

Hamas will not be able to drastically improve people's lives; for many non-pious their lives will be far worse. Hamas will have to focus on the anti-Israel struggle to maintain its momentum.

Incidentally, I say one can expect that BBC jounralist to be released soon as a gesture to the UK by a further empowered Hamas.

Where is the Muqata?

Tell me you swine or I show you some of Sarah's pictures again. Then I see you scream.

It is going to get worse before it gets better. Someone pass me a waffle.