So many good things going on here today...

1. The successful launch of the "Ofek 7" (Horizon 7) Spy satellite. Despite published reports that the 500 kilometer high-in-the-sky satellite can see objects at resolutions on Earth of only 70 centimeters, the head of Israeli space program in the Defence Ministry said the actual resolutions was far better and in the the range of "only a few centimeters" 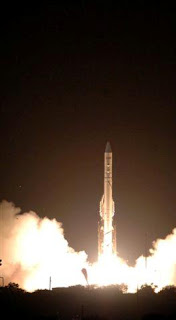 Ofek-7 was launched at precisely 2:40 am and is currently in orbit. A comprehensive test of its systems will be carried out in the coming hours. Israel is expected to begin receiving images within 48 to 72 hours.

The new satellite is expected to provide Israel with better intelligence, particularly with regards to Iran.

“The satellite has advanced abilities, which along with other satellites already in space, will drastically improve Israel’s operational and intelligence capabilities,” said a senior security source. (YNET)

It's a sad day for pork lovers in Israel. 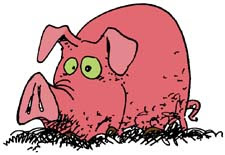 When not out helping Israel's less fortunate residents of Sederot (by providing them with tent cities of refuge while Israel does little to help) billionaire Arcady Gaydamak has just purchased a 51% controlling interest in the "Tiv Taam" non-kosher supermarket chain for close to 100 million dollars. Immediately after the sale, Gaydamak announced that he plans to keep the chain's stores closed on shabbat and only sell kosher from now on.

On the radio this morning, he said it was a "provocation" to sell pork in Israel. Of course, pork producing Kibbutz Mizra is outraged at the decision and responded on the radio this morning by saying Gaydamak had no right to do such a thing, and that they have a quality factory on their kibbutz, and had done much for Eretz Yisrael over the past 85 years. "Much"...as in being the only pork supplier in Israel.

3. Rise of 225 percent in high-tech deals in Israel

"The high-tech industry continues to contribute significantly to the entry of foreign investors and companies into the Israeli industry, serving as an important springboard for other industries in the economy," Eli Barkat, co-chairman of the annual high-tech conference held by the Israel Venture Association (IVA), said Sunday.

Business transactions total $12.04 billion in 2006, compared to approximately $3.7 billion in 2005, on backdrop of more than 300-percent rise in extent of companies' purchases. (YNET)

High Tech jobs are available in Israel! If you work in high tech, there are jobs here for you.

4. Presidential elections in Israel are this coming Wednesday: Shimon Peres vs. Reuven (Ruby) Rivlin. (Collete Avital from the Labor party is also running, but it's doubtful she will even vote for herself)

A few comments; Shimon Peres was cursed by the Gerrer Rebbe in the 1980s that he should never again be "The Head"...and he has never won an election since. However, it seems like this time around Peres has a chance since R' Avodya Yosef (The Shas "Spiritual Leader") has publicly come out in favor of Peres.

The classic Peres Paradox: "If Shimon Peres ran for the World's Biggest Loser Competition, would he come in first?"

Everyone agrees he has the best chance to win now in the past 30 years...and the media is doing all it can to pump up the volume.

In fact, I still think Rivlin has a chance. See what Uri Urbach has to say about Shimon Peres, who pandered to the Chareidi community by repeating the mantra "B'Ezrat Hashem" (With G-d's help) in an interview with Mishpacha magazine.

From: The Section for Enforcing the Ten Commandments, Do not Take the Lord’s Name in Vain Department, Heaven

On the 21st of Sivan, 5767 (June 7, 2007) you gave an interview to our friend Yossi Elituv of the haredi weekly Mishpahah. In the course of the interview you mentioned the name of the Holy One Blessed be He a number of times without his authorization or agreement. You were attempting to create the impression among the religious readers that you and the Holy One are on friendly terms, and that Hashem Himself supports your candidacy for the presidency of the State of Israel.

Needless to say, the Master of the Universe does not express any support for one candidate or another, and the choice is made by human beings. Bringing God’s name into the elections creates a false impression that He prefers a particular candidate, which is liable, Heaven forbid, to harm His Holy Name.

Read the rest of it, here.

5. Gaza continues to fight the war on terror as Fatah and Hamas kill each other.

Yesterday, Hamas gunmen kidnapped Muhammad Sawirki, a 24-year-old a member of Abbas's elite presidential guard, took him to the roof of a 15-story apartment building and threw him to his death.

In retaliation, Fatah militants surrounded the house of a Hamas mosque preacher, fired rocket-propelled grenades at the four-story building and then entered, firing at the preacher, and taking him away. Later, his body was brought to a hospital. (JPOST)

Therefore, it should not come as a surprise that 92% of Palestinians are depressed over the infighting between Hamas and Fatah terrorists.

That's all for now; Have a great Monday...

I know someone connected to ofek-7 (I can't say anymore).

I will call and congratulate him. :)

"High Tech jobs are available in Israel! If you work in high tech, there are jobs here for you."

And if you have a liberal arts degree? I think that Nefesh be-Nefesh would save young, prospective olim a lot of heartache if they visited universities and urged students considering aliyah to study "pragmatic" fields such as computer science, bio/chem...

"See what Uri Urbach has to say about Shimon Peres, who pandered to the Chareidi community by repeating the mantra "B'Ezrat Hashem" (With G-d's help) in an interview with Mishpacha magazine."

I couldn't help but notice the same thing in many of Peres's recent TV appearances. He dropped "Ha-Kadosh Buhwkhoo" at every possible opportunity. It still wouldn't surprise me if Shas sold him out again.

i had never actually seen basar lavan in israel until this past summer. i was visiting a friend in tel aviv and we went to a supermarket. he pulled a pack of what i thought was turkey off the shelve and told me to read the "hasgacha." it was actually a warning that the contents of the package were NOT kosher.

regarding peres, shas just fell another notch from my lofty view of this grand party.

Ari: Was that drop before or after they voted for Oslo?

LMOC: I agree with you about NbN and liberal arts studies... There are other jobs available, but they are more difficult to find.

i wrote "another" notch

interestingly, a commentor on my blog wrote that i was disrepectful to rav ovadia yosef because i criticized shas's support for peres. my specific language might have been a tad crass, but no where did i mention rav ovadia. this is a problem with israeli politics where you can't be critical of a party because it is run by gedolim.

Ari: The walls of Jerusalem are abuzz with pashkevilim why it's horrible to vote for Peres.

"The walls of Jerusalem are abuzz with pashkevilim why it's horrible to vote for Peres."

i'd love to see some examples

I can't believe you'd mention pashkevilim and leave out the fact that we have another gay pride parade coming up next week.

Anyways, in response to the consensus here to learn computer science or something similarly inane in order to increase (not guarantee) your chances of making aliyah, I want to share what my Rebbe said to me when I asked him for advice on this matter:

He told me that I should use my years in college to grow as a person and a ben-torah, and to transform into a Jew who is comfortable to approach the modern world.

He didn't think that computer science was so conducive to that.

So I majored in Jewish History and philosophy, and they undoubtedly (positively) influenced my decision to make aliyah.

If you find that you really cannot get a job in Israel (which probably won't happen for an intelligent Ashkenazic Jew with perfect English) then you can always go back and get a degree in something you think might help. The Israeli government will even pay for it.

I guess that's one of 12 reasons to make Aliyah...

Of course, if you really get into the swing of things here and you can't find a job, you can just live off of dmei avtalah. You'll probably make almost as much as you would working.

Oh, and one more thing- like they always say, in the polls, Shimon Peres is ALWAYS Rosh Memshalah.

Regarding the pork thing, while I do not consider it provocative to sell it in Israel, I cannot understand why it should be in a supermarket. Davka, that's what Chinatown is for (and yes, I realize that finding a Chinatown in Israel might be problematic, but there must be a Christian or other immigrant neigborhood somewhere, no?).

Tzvi- they're very depressed. 92% are suffering from depression: the children the most.