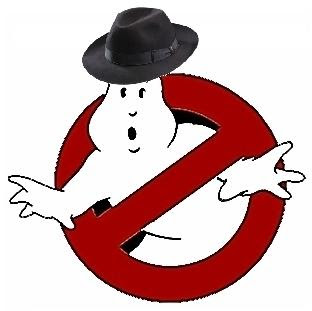 One of my daughters worries a lot.
You name it, she worries about it...

Earthquakes, Tsunamis, Tornadoes, the Plague, Monsters under the bed, etc. This past Shabbat, one of the kids pulled out the weekly "Ask the Cellphone Rabbi" (SMS question and answers) list from a parsha [weekly Torah portion] sheet, and there was a question to the effect of "Do I need to be scared of spirits". The rabbi answered that he had never seen any, and regardless, there is a tradition that spirits don't abound or harm people in the Land of Israel.

Much to my daughter's horror, our oldest son snarkily interjected with a Talmudic story that if you put flour on the floor around your bed when you go to sleep, you'll see chicken tracks/footprints in the flour in the morning, which prove that demons danced around your bed at night.

(Note: a guaranteed fate worse than death is to start putting flour on the floor round your bed a week before Pesach...after the room has been cleaned)

Trying to calm my daughter, I told her that was probably from the "Talmud Bavli" -- the Babylonian Talmud, which was written outside of Israel. And besides, we have no reason to assume there are ghosts or demons lurking around...don't bother them, they won't bother you.

She forgot about the ghosts and we got back to eating lunch. 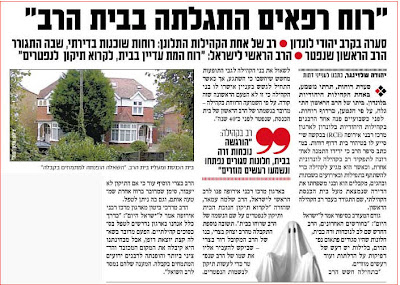 In one of the Jewish communities in London, a ghost is apparently haunting the home of a rabbi.

Two weeks ago, the rabbi turned to the RCE [J@TM: Rabbinical Council of Europe] for help expunging the home from the spirit haunting it. In a letter to the RCE the rabbi wrote that his friend was recently appointed rabbi of a different community in London and when he arrived for Shabbat and Holidays with his family [J@TM: I assume, till they move in permanently] he was given the home above the community synagogue to stay in. This home is where the community's previous rabbi used to live.

Someone closely involved in this episode told "Yisrael Hayom": "In the past few months, the new rabbi noticed a "strange presence" in the house, closed windows would suddenly open and at nights there would be knocks on doors and other weird sounds."

At first, the Rabbi was concerned about asking his community about the phenomena worried they would assume he had gone mad. Yet when he carefully asked about the subject, other community members verified his suspicions and he was not the first to raise such complaints about the house. According to the rumors, it was the spirit of the first rabbi of the synagogue, who died 40 years ago."

The RCE went to Israel's Chief Rabbinate -- and the Sephardi Chief Rabbi, R' Shlomo Amar advised them to "read the "Chanukat Habayit prayer [J@TM: for entering a new home], and a "Tikun" [J@TM: Kabbalistic prayer for "corrections'"] on behalf of the dead, in memory of the Rabbi who used to live at the house.

An additional suggestion came from R' Yitzchak Batzri, one of Israel's noted Kabbalists of today, who asked to give him the name of the deceased rabbi so he could personally conduct a "Tikkun" prayer.

R' Batzri added that if the "Tikkun" did not work, it was a sign that the spirit haunting the house was that of someone else, and he would try again.

"Normally, our organization deals with communal issues, yet this issue is rather extraordinary. From our perspective, this issue was received with serious respect, and it is being dealt with by Rabbis who are experts in Kabbala. The answer has been given to the Rabbi who raised the issue"

Ynetnews just picked up this story as well (but I translated more of the article than they did).
Just don't tell my daughter about this. She worries more than enough.

tell her not to worry. demons are only in England....

Hilarious!
In the investigation, I'd start with the balabatim who were opposed to the hire...

ADDeRabbi: Or perhaps the Rabbi's own kids who didnt want to move there in the first place?

You're thinking of the brady bunch.

this story creepes me out; who is to say that this "gohost" is really a prior soal who is getting our attention to wake us up to go to the promised land, whos to say?!

In all seriousness. The only reason I know that ghosts are real is this:

My grandfather,(a"h he passed away a year and a half ago) who was the most rational person I've ever met (brilliant, able, and insistent to shoot down idea/argument that wasn't entirely founded on logic) saw ghosts on more than two occasions, (verified later when he inquired and people (locals) told him there were regularly reported ghost 'encounters' in those places) but never in Israel. The two times he told me about was once in a hotel room and once in a restaurant.

In neither did the ghost seem at all dangerous or scary, simply unquestionably 'other-worldly.' He couldn't really describe it any further than that.