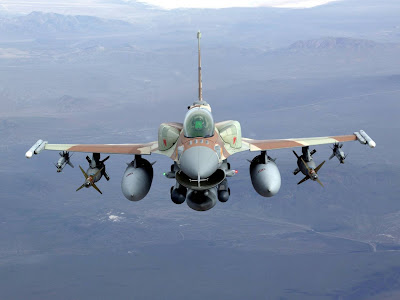 Haaretz quotes CBS on one of the previously unknown operations in the IDF's Cast-lead Gaza offensive 3 months ago.

While the Prime Minister's office is refusing comment (as it should), that didn't stop past IAF commander Eitan Ben Eliyahu from heaping praise on the IAF.

The Israel Air Force carried out an attack last January against a convoy of trucks in Sudan carrying arms for Hamas in the Gaza Strip, according to the American network CBS.

According to the report, 39 people riding in 17 trucks were killed, while civilians in the area suffered injuries.

Official Israeli sources refused to confirm or deny on Wednesday any report of Israel's involvement in an air strike in Sudan.

However, Sudanese State Minister for Highways Mabrouk Mubarak Saleem was quoted in the Paris-based Sudan Tribune Web site as saying that a "major power bombed small trucks carrying arms, burning all of them."

The strike "killed Sudanese, Eritreans and Ethiopians, and injured others," Saleem added.

CBS News national security correspondent David Martin broke the story. He says that Israeli intelligence learned of plans to move weapons through Sudan, north toward Egypt and then via the Sinai into the Gaza Strip.

According to Martin, Israel and the U.S. had signed an agreement for closer international efforts to block smuggling of arms into the Gaza Strip.

During the final days of the Israeli offensive against Hamas, Foreign Minister Tzipi Livni and her American counterpart Condoleezza Rice signed a security-intelligence memorandum on intensifying cooperation in a joint effort to block the smuggling of arms from Iran to Hamas via Sudan.

According to SudanTribune.com, the airstrike was an "embarrassment" to Sudan's government, and it discussed the matter with Egypt's government "to gather more information to formulate a response." (Read the rest here)

That is very interesting. Does this mean that the American government knew about the IAF plan beforehand?

I'd put money on it that the US Government knew about it in advance.

It would also explain the active and positive participation of so many other countries in the discussions about preventing arms smuggling to Hamas during the war.