I'm busier than I can ever recall over the past 3.5 years of blogging, and I apologize for the lack of more updates. Regardless, I'll still try to keep you all updated/amused/informed/outraged/etc.

1. Mordechai and Esther -- where are they buried? In a fascinating article in the Jerusalem Post, Michael Freund discusses the parallel traditions for the burial location of the Purim heroes, Mordechai and Esther. One location is well known to Iranian Jews -- a large site in Hamadan (Shushan?), Iran (Persia).

"The mausoleum housing the shrine of Mordechai and Esther consists of a simple brick structure crowned with a dome which was built five to seven centuries ago over the underground grave sites. It is located in the northwestern city of Hamadan, about 335 kilometers west of Teheran. According to tradition, Hamadan is believed to be the site of the city of Shushan, which played such a central role in the events described in the Book of Esther.

Various travelers down through the ages took note of the site, with the first having been Benjamin of Tudela, the famed 12th century Jewish explorer."

Browsing through the web, I found a whole slew of very cool photos of the burial site from Flickr
(all rights reserved to Indigoprime) 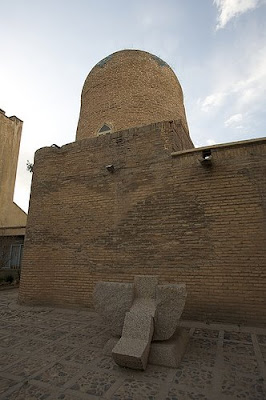 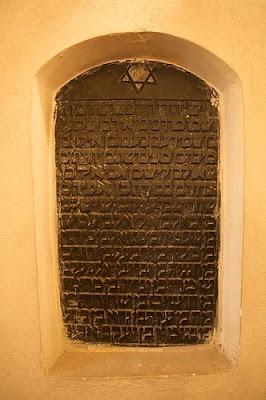 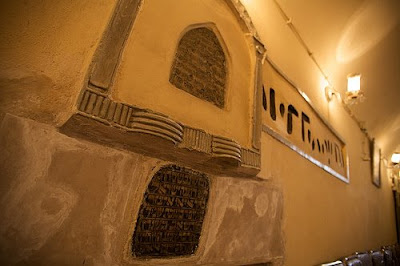 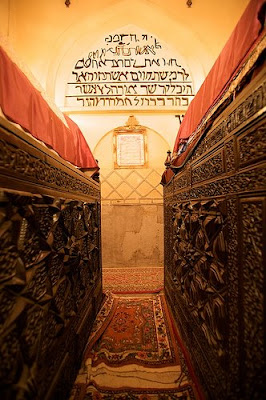 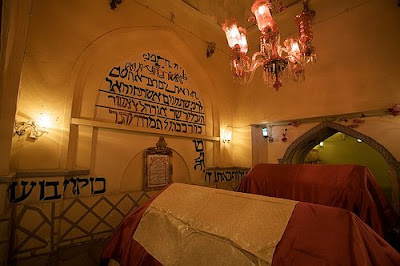 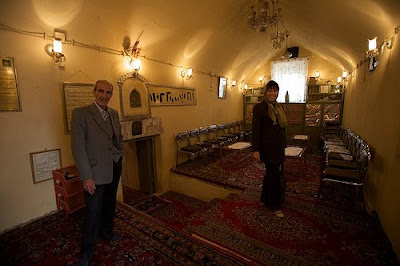 The alternative "mesorah" of the burial place of Mordechai and Esther is near Tzfat, in the Galil of Northern Israel.

"HaRav Moshe Basola, visiting the area in 1522 (5282), depicts the grave he saw in the village of Bar'am. In his description, the grave is under a mound of rocks: "There is Queen Esther, a mound of rocks and a rovere [oak] tree to mark it." This would seem to tally with the 1537 (5297) description of the author of Yichus Ho'ovos Vehanivi'im, who notes, "This is the shape of the monument on the grave of Queen Esther, of blessed memory. Arched on top of the building is a lone rock that looks like the hats that women in this land used to wear. And every Shushan Purim a minyan goes to her grave from Tsefas and reads the Megillah there. They eat and drink and make merry."

His book shows a drawing of the grave topped by something resembling a hat similar to an Arab tarbush. Perhaps it is some sort of raised hat topped by a knob." (source) 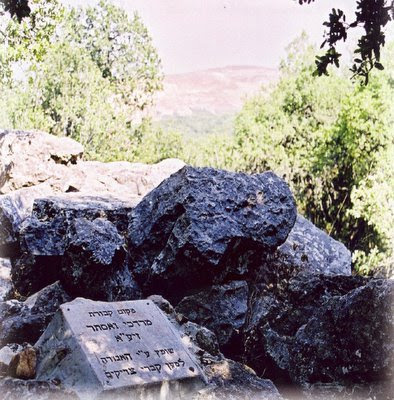 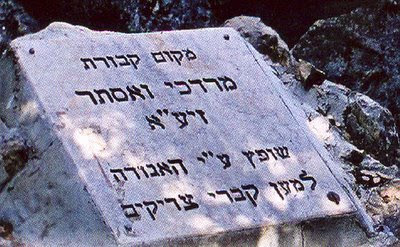 (photo source here, more info here)
I have more photos from the site in Northern Israel from my trip last year (where I took spooky photos and posted about the burial place of soap, alleged made from Jews, by the Nazis).

Hmm. That reminds me of a post I have been intending to write about the underwear tree adorning another grave in the same area...(stay tuned).

2. Got this Meah-Shearim Purim photo from old friend of the blog, Amshinover (one of those few bloggers who I've actually met in person...) 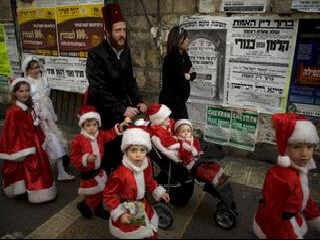 Is it real or photo-shopped? I'd put money on it being real for the following reason:

In the Ultra Orthodox Meah Shearim and Geula neighborhoods of Jerusalem, they routinely sell colorful lights for sukkot with Santa Claus on the wrapper. When you ask the sellers who the funny fat guy in the red and white suit is, they answer, "Sabba Sukkot" (Grandpa Sukkot) -- and many people there have never even heard of Santa Claus. So why should it bother them that the "sukka decoration lights", imported from China has a drawing on in of a guy in a red and white suit? The suits also look cute on little kids as well...

(And if I can show my Raggedy Andy red-mop-hair in public on Purim, then why shouldn't Meah Shearim kids dress up like Sabba Sukkotlings? 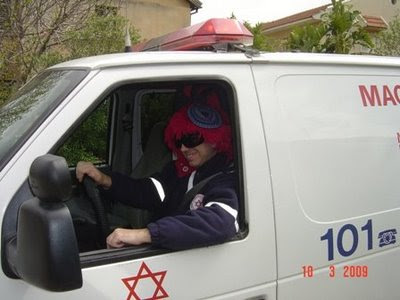 3. Are New York Seminary and Yeshiva students giving themselves a bad name? Apparently so. So many of them hang out in Meah Shearim (which makes me wonder if these are Modern Orthodox or Ultra Orthodox seminaries) during Purim that this year, the residents used a special poisson d'ea la toillette to keep the fair New York maidens and bochrim out of their neighborhood.

The solution was ingenious: Placing stench bombs throughout the main streets in a bid to keep the crowds away from the neighborhoods. It also proved highly effective.

Shmuel Pfenheim, a spokesman for the Haredi Community, described the phenomenon in a conversation with Ynet: "Many undisciplined young women from New York and around the world study in boarding schools in Jerusalem, and they come here and crowd together with a lot of unruly American guys."

He also explained how the stench bombs were made: "Thirty days before the holiday you take from the fisherman fish skin, heads, and various other parts that cannot be used for cooking, put them in a bottle with some water and place the bottles on rooftops under the boiling sun. On Purim eve we spread the bottles in sensitive spots."

According to Pfenheim, "The rascals can get over the stench, but the girls can't stand it."

And how do local residents cope?

"They know in advance not to go through certain streets… those who have to pass there do it quickly and without delay." (YNET)

Glad to be back.

What Mrs. S. says. You were missed. It doesn't matter that interesting people commented in your place. They look stupid in your wig.

Spring is coming. Do I smell the faint odor of waffles, being prepared in advance for The Great Annual J-Blogosphere Breakfast?

its about time.. joe settlers purim torah is not quite like yours.

The picture of the "santa family" is real. We saw them when we were making the rounds of the various tishes. As we were accross the street we didn't see the faces clearly and had wondered if it was an xtian family dressing up--trying to "fit in".

The picture of the little santa clause's is very funny.