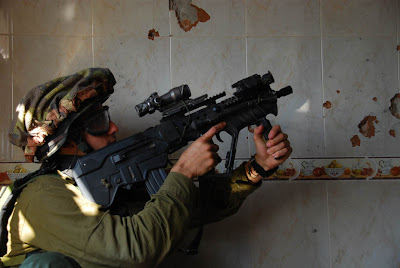 The Israeli designed and manufactured "Tavor" assault rifle is continuing to make inroads within the IDF's infantry ground forces.

After the "Tavor" became the rifle of choice for the "Givati" and "Golani" brigades, the IDF Spokesman has confirmed that the "Nachal" Brigagde will be switching to this rifle during 2010.

“The Tavor is the rifle of the future for the Infantry Corps soldiers, and we are introducing it in the compulsory and reserve units by means of an ongoing process,” explains Maj. Dudu Artzi, the Head of the Rifle Department at the Ground Forces Weaponry Unit.

The Tavor, produced by Israel Weapon Industries, is shorter and more comfortable than the M-16.. The ground forces have expressed their satisfaction with the integration of the rifle in the Golani Brigade and report that the feedback from the soldiers is very positive.

Another advantage of the Tavor is the fact that it is an Israeli product, which strengthens the Israeli industry and lessens Israel’s dependence of foreign companies – the M-16 is produced by the American company, Colt. (IDF Spox)

I'm not complaining at all about my converted M16 to M4 rifle, but if offered a Tavor, I'd happily switch.

Are lefties taught to shoot from the right side, or do they switch it to eject from the other side?

I know they have their advantages, but I doubt that I will ever switch from a Kalashnikov.

It can get rained on, bury it in the mud, not clean it forever, and it still fires like a charm.

And easy to field strip (See how here)!

Actually saw a soldier with a Tavor in the Jerusalem bus station today. First time seeing it in person :). Cool looking gun

Not critisizing, just curious, how are mag changes with this configuration vs. the M4? I can guess at plusses, and minuses, but since I don't have one to play with, I can't tell.

i saw a chayal with one of those recently... that is one scary-looking gun.