The Rebbetzin Owns the Ponovitch Yeshiva 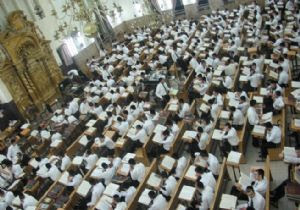 Last week, R' Avraham Kahaneman, the Director of the famed Lithuanian Ponovtich Yeshiva of Bnei Brak passed away at the age of 97.

"Avraham Kahaneman took over the yeshiva, but despite his title as president, he has had little involvement in the past decade due to serious illness. That absence left a power vacuum that essentially split the yeshiva into two institutions in the same building.

Now Kahaneman's son, Rabbi Eliezer Kahaneman, and his son-in-law, Rabbi Shmuel Markovitz - both of whom hold the title of rosh yeshiva and are fighting over the authority that each says the elder Kahaneman gave them - are waiting to hear the contents of Avraham Kahaneman's will, which followers hope will shed light on his position over the protracted dispute."

The "last will and testament" was revealed yesterday...a tiny piece of paper...which bequeathed the entire yeshiva, building, property, financial assets of the yeshiva...and even the coveted name of Director of the Ponovitch Yeshiva...to...a woman?!

Rebbetzin Rivka Kahaneman the widow of R' Kahaneman is now Director of Ponovitch. (source in Hebrew)

Wow,that is unbelievable. Is this another Purim stunt? ;)

When is her first shiur klali?

He was smart. Because of past disagreements/arguments that created unnecessary embarrassment, it will be up to his wife, to designate who will run the Yeshiva, albeit with her husband's wishes in mind. Perhaps neither the son nor son-in-law will achieve the position. What do you think?

Does she have a beard?

If I were her, I'd the sell the place for millions and buy me a huge mansion on the beach somewhere and live the rest of my life in peace and quiet (or as peaceful and quiet as it gets in this country).

rebitzin berenbaum always did great in brooklyn. when i was there it was always she that made the yeshiva and her husband reb shmuel great

How many people are working in the picture, i want to know because i am investigating what are doing Israel people every day, i think that they are very rare people.