At what price freedom?

But there is a deep division in the country as to what price the country should pay (present and future) for this important objective.

Those on the left say that “any price should be paid” to free him. And they believe that hundreds, even thousands of mass murderers and terrorists should be freed in exchange for Gilad Shalit (if he is even still alive), if that is what it takes.

Those on the right believe that targeting Hamas leaders and collective punishment (shutting off water, electricity) against Gaza should be the first steps the government takes to free Gilad. As freeing hundreds and thousands of terrorists will invite more kidnappings of soldiers, and more terror attacks (as the precedents over the past 2 decades has proven).


Until Noam Shalit went into politics, the nation stood united behind him, and “any price” was something that was best left unspoken and purposefully vague, and whatever the price would be, it would be paid.

Certainly in the media, Noam Shalit is off-limits to direct criticism. Almost no one is going to openly attack this bereaved father for what he says or for what he believes are the right steps to get back his son.

But indirectly, the nation is starting to dislike (and even be disgusted by) the direction his campaign has been taken, as indirect criticisms, round-about discussions, and unfiltered talkbacks would indicate.

Articles have begun to talk about the left-wing politicians that have hijacked the Free Shalit campaign, and they discuss the personal beefs these politicians have against Netanyahu. More and more people are asking why is the Free Gilad campaign targeting the Israeli government and specifically Netanyahu when it is Hamas that is holding Gilad hostage. And when the government takes actions against Hamas prisoners, and Noam Shalit then responds that the action is populist, or “too little, too late”, well the nation stands confused. And when Noam Shalit criticizes the right by saying that “the right really doesn’t want Gilad Shalit back”, people understand the place of pain where these statements are coming from, but the damage is still being done.

Most media outlets are not saying outright saying that Noam Shalit is turning the nation against his campaign, whether out of his personal frustration, or because of the cynical political manipulation of left, but it’s easy to read between the lines to see that they are thinking it. But most won’t say it outright for all the right reasons.

This development is unfortunate, because the nation is united in getting back Gilad Shalit, and the nation is aware that if Hamas ever agrees to ANY terms at all, in the end Israel will be releasing thousands of terrorists and mass murderers, and Israel will face a wave of terror and kidnappings as a result. Israel is aware of that and aware we will be paying that price. But Noam, whether out of cynical political manipulations, or personal frustrations is becoming a divisive figure with his statements, and that isn’t helping his campaign.

On the other side of the spectrum is Jonathan Pollard.

Pollard has become a uniting figure. Perhaps surprisingly. And the demands and protests for his release from captivity are uniting two camps that are almost never seen together: Meretz Youth and Bnei Akiva have joined forces to campaign together for his release. 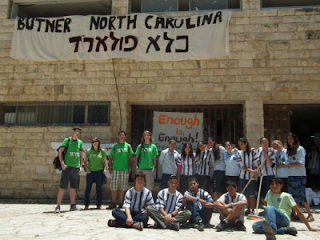 In their latest campaign (and a direct copycat of the actor’s campaign for Shalit), Meretz and Bnei Akiva are dressing up in prison clothing and sitting in a makeshift “jail”, as well as protesting in front of the US Consulate, and working to get signatures for a petition to free Jonathan Pollard.

I don’t know if either will ever be released alive, I just know that everyone wants them both of them home safe.

Pollard will receive mandatory parole and be released on November 21, 2015. In the meantime he gets food, medical care, and visits. So there is no need to worry about him.

It was disgraceful that he was not allowed to attend his father's funeral, but now it's too late to referse that.