Traditionally he is called the Shabbos Goy ("Goy Shel Shabbat" in Hebrew), and historically he plays an important and honorable role in the smooth functioning of Jewish society and household.

His job is simple. Religious Jews are prohibited from doing certain activities on Shabbat, hence they turn to their non-Jewish neighbors when there is a problem that needs to be resolved (such as the air conditioner went off, someone forgot to turn on the bathroom light, or pressing the elevator button for the old man who can't walk up the stairs).

Some famous Shabbos Goys include General Colin Powell (who even speaks Yiddish as a result), Mario Cuomo, Martin Scorsese and even on occasion Barack Obama.

And Jameel has asked that famous question as to how a modern Jewish state should function, do we rely on Shabbos Goys, technology, or is a Jew permitted to "desecrate" for nationally required purposes (police, electric company workers, etc.) It's a fascinating and not simple question.

In previous posts, Jameel has shown some of the latest technological tools that the Tzomet Institute (and others) have created to help sidestep these problems.

Have you ever plugged in one thing into the socket, and the fuse/breaker box for the whole house blew? It just happened to me this Friday, so I found this to be rather timely.

Nir Reiter and Omer Badash connected a computer circuit to a fuse box. When the main circuit blows it checks to see which breaker actually caused the problem. It keeps that one closed and resets the rest. No need to call the (human) Shabbos Goy for this problem (unless that was the switch you needed). 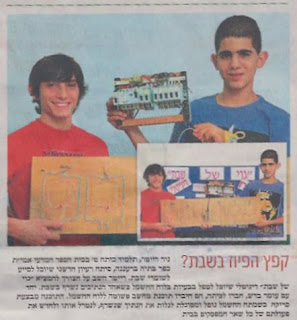 I see a bright future for these two.

Shrink down that technology and adapt it for Switch Panel fuses and the old style bulb fuses and they could sell millions of those.

There's thousands of uses for a back-up fuse kit.

People with second (vacation) homes and hotels with high volume could make good use of that.

Holy moly, Tzomet should send both these boys to engineering school and snatch them up the minute they earn their degrees!