The Government MUST lower the Temperature! 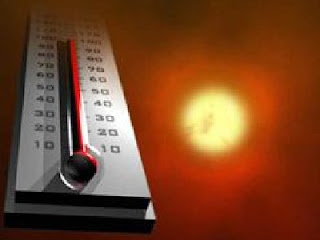 The Israeli government has gone too far -- PM Netanyahu and his right wing cronies in Yisrael Beiteynu, led by the evil oligarchic Avigdor Leiberman have allowed rising temperatures across Israel to reach unbearable heights.

As the upper class surrounds itself by wall to wall air-conditioning, Israel middle class is left to suffer, simply because Israel's obtuse government refuses to acknowledge the problem.

Netanyahu's apathy towards the hot-weather demonstrates why we need immediate action by all those cool-headed leaders of Israel, such as Tzippi Livni and Dr. Ahmed Tibi who have a proven track record of listening to the public, and ensuring cooler weather.

We demand that the government immediately introduce legislation to cap the national weather temperature limit at 30 degree Centigrade (or 86 degree Fahrenheit).

We are planning a demonstration in the coming days, as we drive air-conditioned cars on the road from Tel-Aviv to Jerusalem, to express our outrage at the high temperatures and the apathy of the government.

Netanyahu: Stop the Occupation, Condemn the Charieidm and Settlers, so that you can focus on the real issue of lowering the temperature!

PS: We graciously thank the kind people at the New Israel (lower temperature) Fund for helping fund our apolitical campaign.

Very good.
You should write a few comments at YNET from time to time. We need sane people with a sense of humour.

Thanks for the laugh...well done!
Lea

Great idea, get government to do something worthwhile. A lot of people in the greater Washington DC area would support a similar campaign.

And this is further proof of the power of blogs. Because last night, the temperature was noticeably more comfortable than the night before... :-)