And the attacks continue

9:27 AM Of the 8 people killed in yesterday's attack, the names of 7 have been released:

Yosef Levi, 57, from Holon. His wife is among the injured.

Flora Gaz, 52,
Moshe Gaz, 54
The Gaz family were expecting their first grandchild in the coming months. And are survived by 3 children.

Shula Karlinsky, 54
Dov Karlinsky, 58
The Karlinsky family are survived by 2 children and 2 grandchildren.

Flora and Shula are sisters.

The name of the last terror victim hasn't been released. (It may be the second bus driver).

Initial reports were incorrect, and there were no children killed in the attack yesterday.

8:30 AM Some dozen missiles were fired this morning from Gaza at Ashkelon and Ashdod. Iron Dome took out a few, but 4 people were injured in Ashdod when the missile hit the courtyard of their Yeshiva at around 8:00 AM. 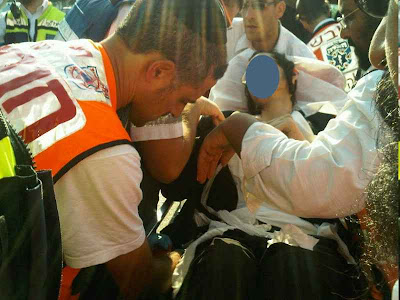 Only a fortnight ago the heads of Israel's security establishment were falling all over themselves to recommend "sweetners" to buy off the Arabs! And none of them saw Thursday's terrorist attack coming because they believe the Arabs are as rational as the Jews. And for that miscalculation, eight Israelis paid with their lives! None of these people will be asked to resign. I'm talking about Barak, Gantz and Cohen. For them, showing consideration for the Arab enemy was a higher priority than safeguarding Jewish lives and securing Israel's borders!

The blind truly lead the blind in Israel!

Shula Karlinsky and Flora Gaz were sisters. Yehi zichram baruch (may their memories be blessed).