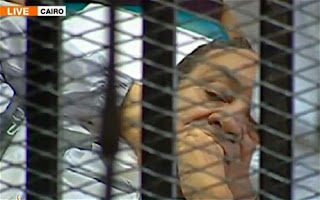 In today's historic trial in Egypt against Hosni Mubarak, a defense lawyer caused stunned silence in the court room when alleging that Mubarak died in 2004, and was replaced by an American Zionist "double".

11.32 Surreal moment as a lawyer calls out that Mubarak died in 2004, and that this court appearance is a conspiracy on the part of America and Israel. He is calling for a DNA test to prove that it's the real Mubarak and not a lookalike.

Various lawyers ranting at the judge, who wearily asks one: "What does what you're saying have to do with the trial?"

It's all being live blogged here at the Daily Telepgraph

The Egyptians have figured out all of Israel's secrets; sharks and vultures are Mossad agents and we have enabled cylon-cloning techniques of introducing mirror copies of humans.

of course the irony of saying the mubarak they have in custody is a spy is that he should get a worse punishment. not a very bright defense lawyer.

I sure hope that lawyer has some evidence to back up those claims. No houston texas DWI lawyer around here would dare to come out with a claim like that without proof.