Islamic scholar Dr. Salah Sultan issued a religious decree according to which it is permissible to kill "any Israeli on Egyptian land, in response to the killing of Egyptian soldiers near the border with Israel," Egyptian Al-Shuruq newspaper reported on Tuesday.

Sultan is a lecturer of Muslim jurisprudence at the Cairo University. In the decree, he ruled that "every Muslim who meets a Zionist is entitled to kill him, after Israel killed 'Camp David'. The Egyptian people do not distinguish between Egyptian and Palestinian blood," he ruled. (YNET)

Egypt’s Agriculture Ministry has announced a ban on the export of palm leaves to Israel starting this year and for the coming two years, a decision that some news reports have linked with recent violence along the Egyptian border with Israel in the past week.

Tensions have been high between the Israeli and Egyptian governments this past week after Israeli military units crossed into Egyptian territory while pursuing alleged terrorists along the border. Six Egyptian police and army personnel were killed by Israeli fire.

The decision to ban the sale of Egyptian palm leaves to Israel has been hailed as an act of defiance on the part of the minister of agriculture, Salah Youssef. However, the minster's decision is not aimed entirely at Israel, but includes a ban on harvesting and exporting palm leaves and hearts nationwide, and reflects growing concern at the poor state of Egypt's population of palm trees, which is under pressure from over-harvesting and disease.

In announcing the decision to ban exports to Isreal during a press conference on Sunday, Youssef made mention of the need to preserve Egypt's wealth of palm trees, which are considered an Egyptian national treasure and which have come under attack from a parasite called the Red Palm Weevil.

Youssef said he reached the decision after reading ministry reports stating the need to preserve palm trees by bringing an end to the cutting of palm leaves and branches clustered around the top of the trunk.

The need to protect the trees has been highlighted before but never enacted, most recently on 26 July this year, when the governor of North Sinai called for a ban on exports to Israel.

Israelis use the palm leaves in the ritual celebration of a Jewish holiday known as the Feast of Tabernacles.

The Israeli Maariv daily reported recently that the regime of ousted President Hosni Mubarak allowed the Israelis to buy large quantities of palm branches, but that the Egyptian revolution might mean the end of exports.

11:59 AM Stress at Israel's Hamat Gader alligator farm. Due to the downfall process of Libya's leader Muammar Kadaffi, the alligator farm is in a quandary what to rename their prize alligator, already named for Kadaffi. 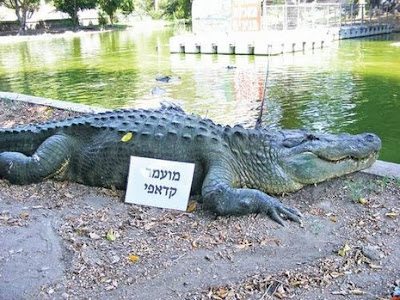 Story and photo from NRG.

11:56 AM - Lulav Shortage threatens Israel due to Egyptian instability...and this was before of the terror attack last week.

YNET has the scoop:

Every year for the past three decades, ahead of the Jewish holiday of Sukkot, Israel imports from Egypt some 700,000 lulavim (one of the Four Species mentioned in the Torah), originating in palm trees in the northern Sinai city of El Arish.

This year could see a shortage in the palm branches, however, as Egyptian President Hosni Mubarak's downfall has created uncertainty in regards to the deal.

According to Foreign Ministry officials, the lulav sale issue is raised every single year, but so far things have always worked themselves out. "Business is business," one of them said.

But state officials have no intention of waiting for the holiday, which takes place in October, and Agriculture Minister Orit Noked has already sent a letter to her Egyptian counterpart.

"I would like to draw your attention to this urgent issue, which relates to a long tradition of buying palm branches from the El Arish area for large parts of the Israeli society before the High Holidays," the minister wrote.

She added, "We are well aware of and appreciate the efforts made by Egypt to keep Sinai clean of pests and diseases which harm the palm branches."

Noked asked to schedule a meeting with the Egyptian officials in charge of the issue in order to continue the import of lulavim.

"The agricultural cooperation between the two countries, as we see in this case, serves as an excellent platform for deepening the relations and strengthening the understanding and friendship between our two nations," she concluded.