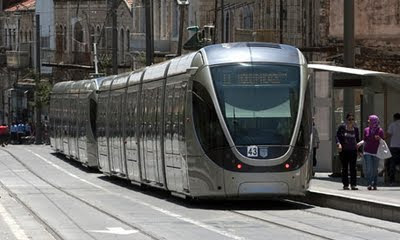 Amidst all the hoopla of the opening of Jerusalem's new "light rail" public transportation, the train has already been subject to Palestinian attacks.

Although the train system was planned to go via all neighborhoods in Jerusalem (Jewish and Arab, alike), the train has already been subject to attacks -- Palestinians have thrown rocks and a firebomb at the train yesterday (Monday). No injuries were reported, but according to one of the train workers, damage was caused to some of the train cars. Train service only started this past Friday...

The train operator has stressed that all the trains' windows are rock and shatter-proof. It's unfortunate that Jerusalem's public train even needs rock proof windows, yet its a sign of the times of potential Arab violence.

Personally, I'm much more concerned about security on the trains, but lets hope that doesn't also become an issue.

The people throwing rocks are just doing what every Jerusalem resident is thinking. (Or so I've been told)

Thank Gd for the train, such a boon to tourists like myself :)