Three Cheers for the Arab Spring!

A group of Egyptian political activists have announced plans to set up a local version “of the Nazi party,” an Egyptian newspaper reported on Thursday.

Citing a leftist Egyptian news portal, the Al-Masry Al-Youm daily said that “the party’s founding deputy is a former military official,” and that the party would be aimed at bringing “together prominent figures from the Egyptian society.”

The report cited founding member Emad Abdel Sattar as saying that the unestablished party “believes in vesting all powers in the president after selecting him or her carefully,” and that “preparations are under way to choose the most competent person to represent the party.”

The newspaper said it could not verify the report, but said it found two Facebook pages that appeared recently under the title of “the Egyptian Nazi Party,” which have so far attracted 70 followers.

Members are “increasing at an unexpected rate, and several people came to ask about the nature of the party and its plans,” the report said.

The party has a one-year plan to develop Egypt – unlike the “marginalized liberal parties, which are like dead bodies,” a source was quoted as saying.

The idea to start it came after some fundamentalist-religious waves emerged, which, according to the source, created a state of chaos, and led to the burning of churches, the destruction of shrines and assaults on unarmed civilians.

Responding to the report, Dr. Mordechai Kedar, of Bar-Ilan University’s Begin-Sadat Center for Strategic Studies, said Egypt was going through a highly turbulent period, adding that all manner of bizarre individuals were launching Facebook groups and attracting members.

Historically, he said, the German Nazi party saw three attempts to copy it in the Arab world in the 1930s in Lebanon, Iraq and Egypt. The Egyptian party of that time was led by former president Anwar Sadat, who went on to sign a peace treaty with Israel in 1979. 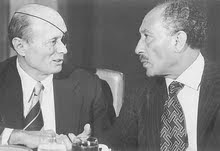 “They were copying the extreme nationalism of Germany, before the Second World War, and before the word ‘Nazi’ became a coarse word,” Kedar said.

Irrespective of the unconfirmed report on “the Egyptian Nazi party,” Egyptian activists opposed to army rule in Egypt are planning to hold demonstrations on Friday, Kedar noted.

“Egypt is a country of 85 million people. Some activists want a second and a third revolution. No one knows where things are heading yet,” he said.

Note the Swastika's on Sadat's tie.