Every Sabbath, Jews read a portion of the Torah (the parsha).  Today we read through the whole Torah in one year, but the ancient Israeli custom was to finish the Torah twice in a 7-year cycle.

The Midrash are compilations of ancient synagogue Sabbath sermons, originating from the period knows as the Dark Ages (3rd-13th centuries) and mostly written in Israel.  They generally follow the Israeli custom.   Most Midrash focus on the first verse or two of the Israeli 'seder', the 'portion of the week'.

Midrash Tanhuma was written in Israel around the 9th century.

Here is my translation for one of the sermons for the seder starting "And these are the generations of Isaac" ("chapter 5" of Toldot, this week's parsha).


You find that Israel tell God: "Lord of the Universe, see how the nations persecute us, they have nothing else to do but sit around and scheme against us", as it says in Lamentations 3:63 "Behold Thou their sitting down, and their rising up; I am their song."

God told them: "Take no heed. They pass evil decrees and I cancel them.  As it says 'I am their song'.

The Midrash then adds a conversation between the Roman emperor Hadrian and the Israeli Jewish leader Rabbi Yehoshua ben Hananiah.

Hadrian: How great is the sheep that is surrounded by 70 wolves.

Rabbi Yehoshua: How great is the shepherd, who saves it and guards it.


Hadrian's question can be understood in different ways.  He's either praising the sheep (Israel), who manages to withstand the hungry wolves (nations) around it, or he's praising the wolves, who are not eating the sheep.

Rabbi Yehoshua answers him that it's not up to the sheep or the wolves, it's all in God's hands.


Antisemitism is not new.  Even back in the first millennium, the Jews who lived here in Israel felt that the nations of the world were scheming against us.  Just like today, they asked themselves: Don't the nations have anything better to do?  Don't they see the real evil in their world?

As it says in the Sifrei, a Midrash written around the 3rd century: "Everybody knows that Esau hates Jacob".  Esau is the Romans and the Christians.  Jacob is Israel.  Since then, the list of our enemies has only grown.

Wherever I am, my blog turns towards Eretz Yisrael טובה הארץ מאד מאד
Posted by Ora No comments:

The Holiest Sports Arena on Earth

The Holiest Sports Arena on Earth is right here in Jerusalem...on the Temple Mount! Or as the rest of the world likes to refer to it, Haram al-Sharif.

This holy place which "offends" Muslim leaders when Jews silently and peacefully walk through the area, is also the place where holy Muslim children play holy sports games, such as soccer (European football), volleyball and others.

Yet it's a terrible provocation for Jews to walk there....let alone move their lips in silent prayer in the holiest sports arena on the planet. 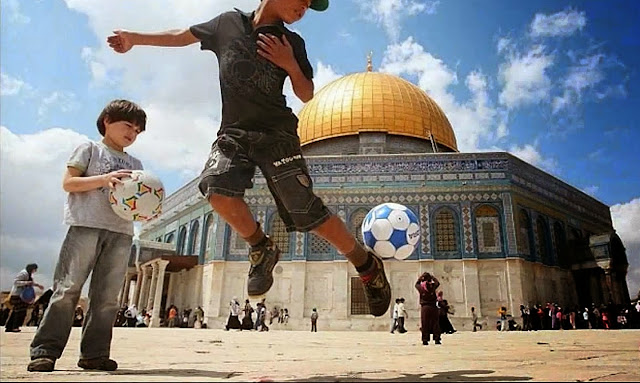 On the bright side, at least the ball is blue and white... 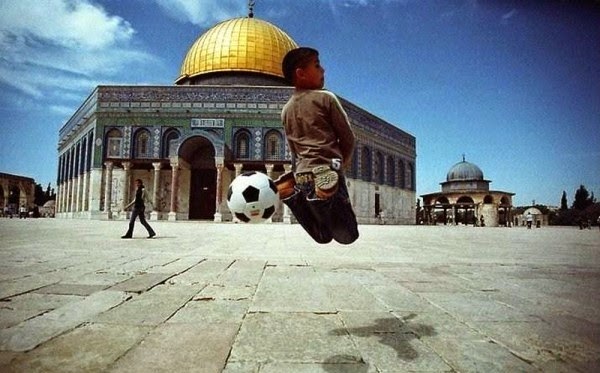