I just saw this on Facebook, and it deserves a proper response.

There was a massive flood in a town, but one holy man managed to survive by getting up onto the roof of his house.

As he sat there watching the waters rise higher and higher, he prayed and prayed (3 times a day, in fact) to God to save him from drowning.

A boat came by, but he turned the rescue crew down, telling them he's waiting for God to save him.

Then a helicopter flew by, but he turned down that rescue crew too, saying that he's waiting for God to save him.

The man reached heaven and in righteous anger asked God, "Why didn't You save me?"

God sighed and responded to the holy man, "I sent you a boat and a helicopter! I even sent a free El Al flight to Israel for you, your family and your entire congregation, with an absorption basket to help settle you in! What the heck were you thinking when you were you praying for Moshiach to have no more 3 day Yom Tovs?!"

Wherever I am, my blog turns towards Eretz Yisrael טובה הארץ מאד מאד
Posted by JoeSettler 14 comments:

JoeSettler made a mistake, and Israel is going to pay for it

It's not often that I'm wrong, and some of you might revel in that I made a mistake, except that the mistake I made is a bad one. Two weeks ago I read into Obama's statement, following his spectacularly bad Syrian fiasco that he would actually be dealing with his mess at home, and finally leave Israel alone. Unfortunately, that wasn't the case. Even worse, at the UN, Obama made it abundantly clear that he plans to double down on his pressure on Israel. He made it appear that he is linking that to dealing with Iran, though it's clear he won't do anything at all with Iran, that needs doing, except maybe invite Rouhani to dinner and a photo op. So, he just going to concentrate on making things bad for Israel. Obviously feels he hasn't screwed up the rest of the Middle East enough yet, so he needs to destabilize the only stable country in the region. Gee, thanks.

Wherever I am, my blog turns towards Eretz Yisrael טובה הארץ מאד מאד
Posted by JoeSettler 3 comments:

Holiday greetings from the past

A mosaic from one of the ancient synagogues in Tiberias, displaying the Arba Minim.  The synagogue was built in the 6th century and lasted until the 11th century.  The Crusaders later built their fortress over it. 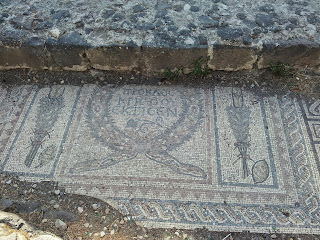 The mosaic includes a dedication to Prokolos son of Crispos.

Posted by Ora No comments:


From the 13th century onward, there is evidence regarding special popular beliefs connected with Hoshana Rabba. There was a very widespread belief that he who did not see the shadow of his head on the night of Hoshana Rabba [Jameel: From the light of the moon] would die during that year, for Hoshana Rabba was the day of the "seal," wherein the verdict of man (passed on the *Day of Atonement) is "sealed," or the day on which the "notices" of the verdict were sent out (Sefer Ḥasidim, ed. by R. Margoliot (1957), nos. 452–3; Naḥmanides on Num. 14:9; Zohar, Ex., 142a–b).


I guess Hoshana Rabba in Sleepy Hollow in 1790 was less than fortuitous.


The story is set in 1790 in the countryside around the Dutch settlement of Tarry Town (historical Tarrytown, New York), in a secluded glen called Sleepy Hollow. Sleepy Hollow is renowned for its ghosts and the haunting atmosphere that pervades the imaginations of its inhabitants and visitors. The most infamous spectre in the Hollow is the Headless Horseman, said to be the ghost of a Hessian trooper who had his head shot off by a stray cannonball during "some nameless battle" of the American Revolutionary War, and who "rides forth to the scene of battle in nightly quest of his head".  HT: Steg

A Pitka Tava to all our readers...

The Centralization of Israel and a Cashless Society

Centralization in Israel is a two-headed coin (or perhaps a two-headed monster). There’s no doubt, that so many bureaucratic activities go much smoother in Israel than they do in America, because we have ID numbers and cards that are linked to everything. Of course sometimes that doubles the frustration when obvious things need to be manually duplicated over and over for no reason. On the other hand, that centralization provides no flexibility or safety net. Having problems with one government office can easily spill over to an unrelated one, since you’re linked together everywhere on file. And then there is the basic issue of personal privacy and civil liberties. Now the Israeli government is attempting to implement two extreme decisions that threaten civil liberties more than ever. The first we’ve talked about in the past, which is the biometric system that is currently being tested. God forbid that should ever become mandatory. Right now, even though your personal bio-data is out there with different organizations, there is still some semblance of privacy and protection because of the separation that naturally exists between your health fund, the army, the government, and so on. But once that goes away, there goes your privacy. You will have no control over your personal information at all, and you’re reliant on the government, which as we know, is not the most effective of protectors of personal data. The second move is just as scary. The Israeli government is actually considering trying to find a way to abolish cash. There was a unanimous cabinet decision to explore how to do that (Hey Naftali Bennett, I didn’t vote for you to lose my civil liberties – remember that come election time). They want to get rid of cash, and give everyone rechargeable “cash cards” that will allow the government to track every single transaction you do. EVERY SINGLE TRANSACTION. I can’t even begin to describe the civil liberties and privacy violations that implementing this system will create. And if they actually believe this will get rid of cash, or the black market, they’re even stupider than I thought. Bitcoin, gold, barter… you name it. Smart (and dumb) people will find their way around it. Not to do illegal transactions, mind you, but simply to protect their privacy away from the government’s snooping eyes. And then we’ll all be criminals, because of a dangerous legislation which is an intrusive attempt to suck more tax money out of us and spy on us, and not just spy directly, but with data mining too, to study our purchase and transaction behavior, and find every last penny they can suck out of us and understand what we do with it. I guarantee one thing. If this legislation passes, if the party I voted for, and the ones I didn’t, don’t stop this in its tracks, I will do everything (legal) to make sure those people do not get elected again, and be replaced with people who do care and understand the importance of civil liberties and fear the tyranny of government.

Wherever I am, my blog turns towards Eretz Yisrael טובה הארץ מאד מאד
Posted by JoeSettler 15 comments:

Did Iran and Russia Just Save Israel?

It would be ironic if true, but it may very well be that Iran and Russia (and Syria) just saved Israel (or God did, using them as proxies). Obama stated on Thursday that he's going to be pivoting his focus away from the international arena and instead concentrate on domestic issues and politics (God help America). After having been burnt in Syria, and completely played by Russia and Iran, it's as close to an admission of policy failure and incompetence as you can possibly get. On the downside, it means the U.S. military may not be dealing with Iran if it tries to cross the nuclear red line, but based on what we've heard during the Syrian debacle, it seems unlikely they were going to do so in the first place. A number of respected U.S. military commentators were saying outright that the U.S. could not financially afford a full-scale war with Syria. The U.S. would need to be prepared for escalation into a full-scale war if they were going to undertake even limited military action. So, if the U.S. wasn't prepared or capable of running a small or full scale operation/war in third world Syria, how can anyone reasonably have expected that they would be in a position to do so in Iran? The message here for Israel, is that Israel is going to have to turn directly to their true source of power for this one. On the upside, if Obama feels burned by Syria, the Arab Spring, Egypt, Russia, and everything else International, then maybe, just maybe, he'll leave Israel alone too. Maybe this is the end of Obama trying to embed Hamas into Judea and Samaria, and trying to divide Jerusalem, trying to kick out Jews out of our homes, and trying to promote this latest "peace process". One can hope. G'mar Chatima Tova

Another Dark Day for America

I think it's fair to say that Putin spit in Obama's face yesterday, and then rubbed it in for good measure. Just the other day, President Obama made a Clintonian-like statement regarding a possible intervention in Syria, “First of all, I didn't set a red line. The world set a red line.” Um, except that Obama did set a red line. On Aug. 20, 2012, Obama said, “We have been very clear to the Assad regime ... that a red line for us is, we start seeing a whole bunch of chemical weapons moving around or being utilized.” That's a pretty pathetic attempt to extricate himself from a poorly thought out statement, but not unexpected anymore. Obama painted himself into a corner, and he's been trying to weasel his way out of it, ever since he realized that people were listening to what he said and trying to hold him to it. And now Obama apparently believes that Putin has pulled his chestnuts out of the fire. Syria will (maybe) give up their chemical weapons. Russia and Iran(!) will be guarantors of the deal. Of course, Putin wasted no time in using this victory to reposition Russia as the world's new, undefied superpower. He announced he is going to complete the sale to Iran of the S-300 anti-aircraft missiles that he was forced to halt 3 years ago. He's going to build another nuclear reactor in Iran. (And let's not forget Snowden). Everything that America doesn't (shouldn't?) want to happen. So, if you haven't gotten the point yet, Obama just unilaterally demoted the US from being the sole global superpower. He just gave Iran a green light to do what they want without fear of reprisal, and he personally conceded world leadership to Vladmir Putin. September 11 will once again go down in history as another dark day for America.