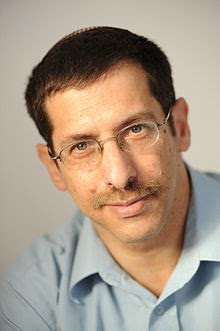 Despite the title above, I never met Uri Orbach personally. I read his many books, read his children books to my children and laughed with my kids at his clever poems, rhymes, stories and wit, while we smiled at the outstanding illustrations from Shay Charka (who partnered with Orbach on many books). His books and newspaper articles for adults were witty, funny, introspective and always brought out a smile.

So how did I know him so well – in addition to his books and articles, he co-hosted “The Last Word” daily radio show on IDF radio. Uri was the right-leaning, kippa-wearing host and opposite him was the left-leaning, secular Irit Linor. Their cheerful daily banter on politics and religion was a breath of fresh air in Israel’s strident media – showing that 2 sides of the spectrum could intelligently disagree on issues of major importance with humor and respect. If you wanted to see how Israel’s diverse mosaic of citizens could get along with each other, Uri was a great representative for religious Zionism. He could get his message across without yelling, without insulting, without making someone feel uncomfortable – yet with a kindness and humor that was infectious and left you wanting to hear more.

I looked through my blog for tidbits about Uri from over the years and it brought a smile to my face (nor did it surprise me at all) that he was on the jury for deciding the great Efrat Cholent competition in 2011.

Uri entered politics and represented the “Bayit Yehudi” party and his background was a living example of the party; raised and educated with the values of religious Zionism, he attended the Nechalim religious high school and then the hesder Yeshiva in Kiryat Shmona (a 5 year program of yeshiva studies and IDF combat service).

Uri brought a unique value to the Knesset of togetherness that rarely exists in Israel’s spectrum. Orbach had no “bitter political enemies” in the Knesset, and while he had his direction, ideology and opinions, Orbach was a rare common denominator that all could agree upon – he was a mentsch, a leader, and a friend. Uri was a cabinet member in the current government responsible for senior citizen services and you can still hear his influence in the gently comical ads on the radio, advertising improved services for the elderly.

It is hard to succinctly summarize the life of someone who wrote so much, communicated via radio, TV, internet, newspapers, social media, and touched the lives of so many in Israel during his short lifetime of 54 years. I hope we can continue his legacy of finding some common ground between us to continue the dream of building the State of Israel, together.

May his memory be a blessing.

Wherever I am, my blog turns towards Eretz Yisrael טובה הארץ מאד מאד
Posted by Jameel @ The Muqata No comments: