On a very serious note, Israel's Ministry of Religion has contracted the popular GPS application WAZE to create a special service for WAZE users in Israel -- the ability to find mikvaot in every Israeli city.

Ostensibly, this is a great idea - demonstrating how the religious establishment connects to the community by offering a well-intentioned  high-tech solution for discretely finding the closest mikva to your location.

Here in Israel, Waze isn't only used as a GPS program, but its connected directly to people's Facebook, Foursquare and Twitter feeds -- enabling your friends to see where you are going, and where you have "checked in.".  WAZE actually posts your location to your FaceBook page...and you are bound to even forget its being posted there.

Unfortunately, the following disaster scenarios are a very likely possibility... 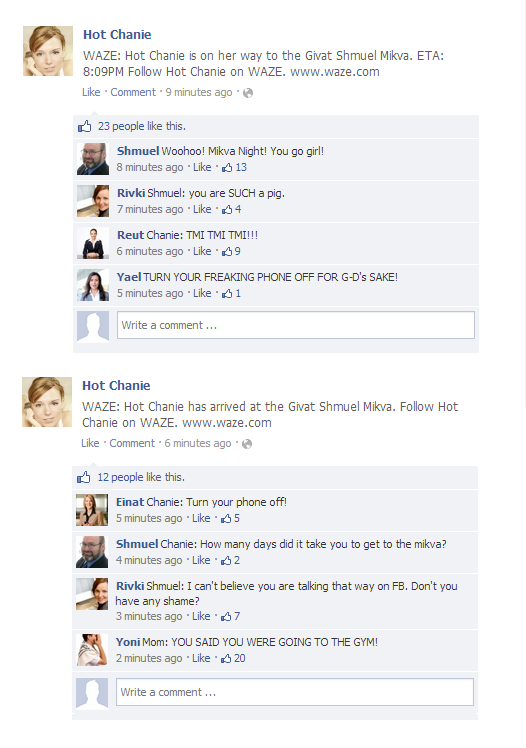 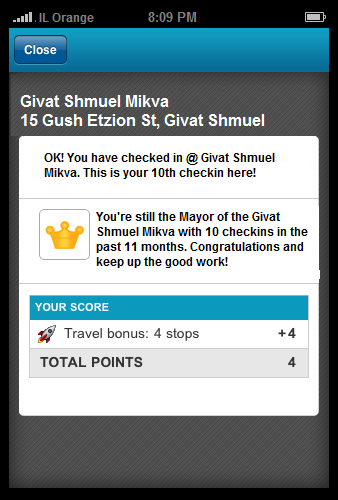 And of course, this would propagate via the web on twitter and all the standard social media applications.

Maybe the religious ministry didn't think this through...

In preparation for a possible war with Russia, Yeshiva students in Kiev have received draft notices from the Ukrainian army.


Meir Pavlovsky (29), a Kiev yeshiva student said he and a number of his friends received draft notices. Pavlovsky said that if drafted, he would move to Israel.  Pavlovsky was first drafted in 2002 for 2 years and then became religiously observant.  "It is impossible to be religious in the Ukrainian army," he said.  "There is no kosher food and you cannot observe halacha. You must be clean shaven daily and work on Shabbat -- the day for cleaning the base.  Whoever tries to draft me -- I will flee to Israel." (translated freely from NRG) and reported in the JewishPress

Coming on the heels of the anti-draft rally 2 days ago, in which signs were seen that Yeshiva students in Israel would flee Israel if forced to be drafted -- what could be more ironic.

Wherever I am, my blog turns towards Eretz Yisrael טובה הארץ מאד מאד
Posted by Jameel @ The Muqata No comments:

To Rally or Not, That is the Question

There were two blocks debating each other in many of the settlements this Shabbat, and both sides raised some very valid points.

On one side are the pro-rally settlers who plan to go join in the Haredi anti-draft protest.

Their positions are as follows:

1. Haredim are currently on target for the army's annual draft expectations from the Haredi community. At this growth rate, they'll definitely reach the army's goals in 2017.

So why in the world is the government suddenly introducing criminal sanctions onto the Haredi community, when, despite the difficulties, they're meeting their numbers?

2. If this were about all citizens sharing the burden, why are Lapid and friends ignoring the Arabs?

3. If this were really only about the draft, then why were Lapid and friends going after Hesder, until Bennett cut some sort of deal with him?

4. If we don't stand with the Haredim now, when Lapid and friends go after the settlements (and Hesder), we won't be able to count on the Haredim as allies.

5. If Lapid and friends succeed, in the next elections, they'll be big enough to not need Bennett and the restrictions he's placed on them, and then Hesder, the Settlements and the National-Religious community are really going to really be in trouble.

The pro-rally groups raises some very important points, that seem to indicate that this bill and the attacks on the Haredi community are more about populism, elections, hurting the Torah and the religious sector as a whole.

On the anti-Rally side, the following arguments were put forth:
1. Everyone should do the army, and its not fair to everyone else that the Haredim aren't doing their share.

2. If the Haredi position was really only about Torah learning and how Torah learning protects the State and they're sharing in the burden by learning - and not based on an anti-Zionist ideology, then they aren't they at least saying the prayers for the State and IDF soldiers in their shuls.

Since they don't, it proves this protest is not about being drafted, but rather not wanting to be a partner in the State of Israel itself and not caring for anyone else outside their community.

3. Lapid won't be able to hurt the Hesder programs and the religious in the army, because we make up 50% of the combat units, so we don't need the Haredim as allies for that.

4. The Dati-Leumi and Settler communities simply can't count on the Haredim to stand by us. They didn't stand with us during Gush Katif, and they only care about their own communities and whoever pays them enough to support their lifestyles. They don't care about anyone else's Torah community besides their own (see Gafni's threats to destroy Hesder and the settlements).

We gain nothing by standing with them, and some people even said, they're getting what they deserve.

The anti-Rally group also raises some extremely valid points - essentially the isolationist approach of the Haredi community has proven that Haredim are unreliable allies, and incapable of seeing themselves as part of the greater religious and Jewish community in Israel, and acting on that partnership, so why should we act for them, when we think they should be drafted anyway, just like we are.

What do I conclude from all this?
First of all, there's no doubt the Haredi community has shot itself in the foot, and the Dati-Leumi community may very well follow in their footsteps.

Because the Haredim are still beating that dead horse and fighting battles that ended long ago between the Tziyoinim and the Dosim, they've backed themselves into a corner, and have made their natural allies - the Dati-Leumi community, wary, unsympathetic and even angry at them.

The Haredim have taken their isolationist ideology too far and are incapable of participating in the wider community in a healthy manner, which certainly makes it completely impossible to trust them in the political realm - unless you're the one signing the check.

It's about lip service.

If the Haredi community wants to see the Dati-Leumi community standing beside them, then they need to make changes in their lip service - their prayers and statements.

It's not enough to say your learning protects Israel, when you refuse to say a prayer for the Jewish country you live in, or for the Jewish soldiers who die for you. Or when a Haredi soldier comes home, how he's forced to hide his uniform so that his neighbors don't bad mouth him or his family.

That change in lip service would show the Dati-Leumi community that the Haredi community has matured and is prepared to view its fellow Jewish communities as their brothers in Israel.

The Haredim need to openly say they will support Hesder and the Settlements (where Haredi communities live too, by the way), no matter what political pressure or incentives are placed in front of them - it can't be that the only Torah communities and the only Yeshivas that Hareidim care about are their own.

On the other side, the Settlers and Dati-Leumi community needs to realize that Lapid and friends are the enemies of Torah life in Israel and of settlements. The Haredim are easy targets right now, but their recent slip of targeting Hesder proves it won't quietly end with just Haredim.

The fact that Haredi draft goals are being met, and don't require spurious criminal sanctions added onto the bill, indicate that this is a populist and dangerous attack, unconnected to the draft.

It doesn't matter that, right now, we can't count on the Haredim in the political realm. We need to trust that if we do the right thing here, the Haredim will mature and begin start acting as responsible and reliable allies, just as they've been quietly sending more and more young men to the army.

If they don't act properly, the onus is on them - but letting Lapid win and take back all the progress that was made in expanding Haredi draft numbers - just so he'll win more seats in the next election - that onus will be on us.

Both sides, Haredi and Dati-Leumi, have some serious thinking to do about who are real allies are and should be, and how we interact with one another.

I hope the right conclusions are reached before it is too late.

Wherever I am, my blog turns towards Eretz Yisrael טובה הארץ מאד מאד
Posted by JoeSettler 4 comments: